Written by Robert Brokenmouth on 11 March 2016. 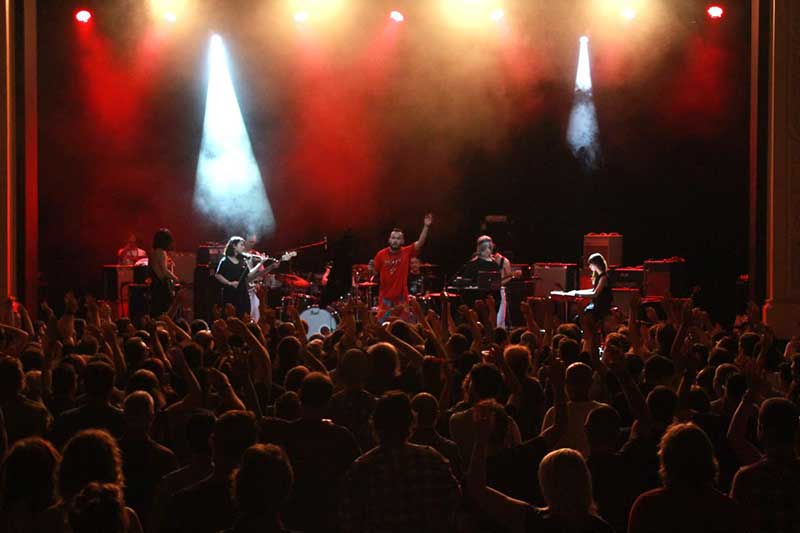 So here we are at Thebarton Theatre, known as Thebby. I've been coming here as a punter since 1980. Magazine, XTC (second tour of Aus); the tedious Dead Kennedys (great LP, rubbish live); The Clash (great LPs, fairly ordinary live)... hell, thinking about it, Madness were a lot better live here than The Clash and the DKs. Cave, Devo ... the list goes on. The suburb was known as Barton, but people kept calling it The Barton - as in, 'where ya goin'?' 'The Barton, mate...' and they eventually changed the name of the suburb.

So, I was asked to go here and review these bands. Since I can’t possibly listen to every band ever, I was in simple ignorance of both. The best way to appreciate a live act is to see them. After all, quite a few people in the audience will also be in the same boat, because that’s what the Adelaide Festival is about, bringing us in contact with the new and interesting and so on. If a band can’t grab you live, then they shouldn’t be playing live. In fact, if a film, or a band, or anything doesn’t do it for you … nope, I’m outta here.

I recall seeing about three-quarters of a big crowd walk out on the Boys Next Door (who I’d never seen before and who I thought were brilliant); and three quarters of a half-full cinema stump out during Paris, Texas because presumably they didn’t get it.

Of course, we've all seen some crap over the years; most of us at gigs, don't take sides, but stand at the back and keep drinking, mildly agreeing with the assorted characters asserting how brilliant a band is because they want the evening to be fantastic, they tell themselves it was fantastic and then they tell everybody else. And I’m sure you must’ve given up on some performances and headed grimly for the bar while your significant other bounced about like a cork on an ocean of stupidity down the front.

I’d heard good things about both acts but, curiously, with no overlaps.

Let’s start with the bad news. I really disliked Godspeed! You Black Emperor. And the worst of it is that they’re clearly all damn talented musicians, and their level of unity (it’s an eight-piece) is unique. Three guitarists sitting on seats, all facing each other. In fact, their stage setup is like you’re watching them in their rehearsal room. The head guitarist sits with his back to us. Absurdly, he’s ignoring the fact that he’s on stage and people are watching.

I suppose it’s some daft political thing; daft because no-one notices the point. How careful and determined everyone was to get all this right. However, in a sense Godspeed are a progressive rock orchestra. And that, I’m afraid, is one reason why I finally left before the end. ‘Progressive’ is often code, at least in my experience, for ‘musicianly without direction’.

I think what really did it was the second song or the third, where the band suddenly came upon a rather rocking, chugging beat, and the whole machine swung into a different gear. The two drummers, two bassists and two of the guitarists, and the violinist, are all grooving. This was the deep heart of the band, a sort of crunch between that period of Swans with Jarboe, and some other band. Status Quo, even. But without a singer or a focal point, an orchestra needs to have demonstrable direction, which I didn’t see or hear tonight. I’m not saying they should rawk out, dude, but that moment was the only one in which the entire band seemed galvanised, animated, alive.

But it’s the other guitarist who calls the shots, apparently, and soon we were back to that sort of drifting sort of thing, which the band do really well, but it’s like waiting for a fucking train. Worse, they do that 6ts thing with the two crappy films on a split screen behind them. The Models used to use that dreadful thing with lots of footage of film zipping past and I used think they were a bunch of lazy bastards. Pretend meaning, didn’t mean a thing.

Godspeed used endless repeated shots and footage of: a collapsed building in a forest, bloody pigeons flocking about the place (I really hate pigeons, they make a real mess of a city), and an abandoned building, each of these images over and over and bloody over.

After a few minutes of this visual noodling, any significance the images may once have had vanish and you become impatient for something else. Then you’re back to the badly shot footage of light through venetian blinds, and that, my dear was when I decided that leaving was the better part of valour, before I got too angry.

Godspeed's stage set-up (the minor mountain of pedals on top of the synth. The huge horseshoe of pedals around the leader. Everyone else’s collection of pedals), plus their complete indifference to the audience, is clearly intended to make the point that 'what we do is art, no different from you watching a painting in a gallery'. I've encountered this conceit before, and it's false humility is boundless in its arrogance. Like the Puritans, they're only doing this for our own good. What a shame. Do you think you could go and spread your dreary vibe elsewhere? Sententiousness is always unpleasant.

And, I don't care how many 'interesting' sounds they got out of their bloody pedals, Godspeed may be an educational class for guitar knuts, but as something to behold they are quite, quite dull. I got more out of watching Cabin Inn's support of Michael Plater a month or so ago; it was much shorter, but far more eloquent. When Cabin joined Plater onstage, their jam was superb, two like minds ricocheting off and between each other was a treat. Plater delights in simplicity - the bugger has two pedals only - a la Hendrix - forcing you to pay attention to the tiers of tone he sets up. And he enjoys feeding off someone like Dean Richards or Cabin with a veritable slab of pedals, people who can always use them to great effect.

Both Dean and Cabin are far more interesting to watch on a stage than Godspeed, far more engaging, and their music ... well, that's the thing, isn't it? If you declare to the world, 'we're a piece of art', you'd better have something fucking stonking in order to get away with it. That said, New Order apparently trundle onstage, don't address the crowd, and fuck right off again. Rather like the most boring rehearsal you ever saw. Godspeed don't have what it takes.

No, let's get this straight; Godspeed's music had moments. But they tried my patience sorely, and - sorry? Not doing my job? I stayed two songs longer than if I’d forked out. Over the years I’ve walked out of bands not frequently but more often than most people I know. Why stay if it’s not doing it for me? I’ve walked on the likes of The Hard-Ons and The Mark of Cain because they were boring. And tonight, I would've walked after two of their long songs if I hadn't been thinking of you, dear reader. But once those blasted wonky blurry images of the sun coming through the venetians turned up again... enough.

I’d say I’d be happy to give a few of their records a listen, but I hope I’m not reminded of a particularly tiresome gig. But I won’t be seeing them if they tour again. Not because they’re bad, but because … I really didn’t like them, and you can’t make me. I’ve been told I left after about 50 minutes - which, as I say, was either four or five songs. As I walked through the crowd, everyone’s faces were rapt, attentive, excited. Some were slumped down by the wall wearing amazed - or lost - expressions. There were a handful of people who clearly agreed with me out at the bar, which I decided against and headed off into the wet. The contrast between the two bands could not have been greater. 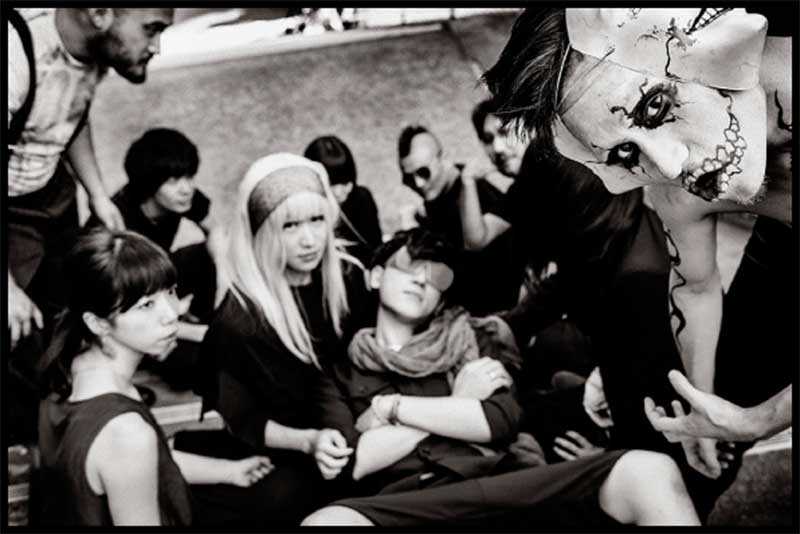 Vampillia, up close and personal.

Heading in from the wet, however, much earlier on, we wedged ourselves up against the entirely unnecessary crowd barrier and were treated to a brilliant performance - and brilliant music, from Osaka's Vampillia, from whom I will definitely be harvesting CDs. They’re a nine or 10-piece outfit; they brought a friend to introduce them and take pictures, and I suspect the lighting person too - because the lighting alone was the best I’d seen at a rock gig in decades. (Whoever did the lights at Thebby, my rather shabby hat comes off to you.) Grandiose without being tonto, elegant and moving without all the fiddling about which so many lighting nonces do. Vampillia are famous for describing their music as ‘brutal orchestra’, which is kind of accurate.

But the band. Two drummers, a bass, violin, two guitars, a computer and box, and keys. Sounds like it would be a cacophonous mess, but (as with Godspeed) each song is carefully, cleverly, smartly constructed. Within these fantastic shapes - the leader of the band is, I think, either the bassist or the violinist - the band leap, dance, fray, tease, scrape and generally get our attention.

I could cheerfully watch them over and over without their singer, so well-constructed and moving are their songs. Their manner of performance (in the classical tradition, rehearse rehearse and rehearse then discover the nuances within) and the sheer effortless power, the beauty and the compressed rage... elevates, lifts and enraptures. Vampillia are a band for the ages; the singer is the icing on the cake, really.

With the singer (he calls himself Death apparently) … they’re some other damned animal altogether. You know the singer’s dilemma? What the hell to do while the band are making meaningful buildups, or when there’s simply no need for lyrics? Enter the holy fool, absurd and foolish by one turn, mesmerising and terrible by another. At one point he grabbed a ladder (which even I could see had at least one of its bolts snapped) and heaved it into the crowd, clambered up and bellowed away at the assembled throng. And he did that twice. Of course I don’t speak Japanese, but somehow that didn’t seem to matter.

Vampillia are touring Australia. You need to see them if they get to your sad burg. They’re interesting, exciting, very involving and you won’t regret it.