This involves two brief history lessons. 3D was formerly 5MMM, which sprung from the hippy and activist movements here in the early '70s. People wore 5MMM badges for years before the radio station existed, and when it finally started it was a huge thing for the by-then splintered alternative communities. Hour-long talks by ex-CIA members vied with Greasy Pop Records' head honcho Doug Thomas playing Armand Schaubroeck's "Ratfucker." Wrinkly stay-at-home lunatics would assiduously listen through it all, calling the council, the politicians and the radio station to complain about the bad language. Occasionally someone would blunder in as an announcer was drivelling, and do the vacuuming.

A couple of years later, out of the blue as far as we were concerned, Grong Grong appeared on the alternative scene like some sort of raving, four-headed gargoyle. Before I saw them I kept hearing references to the Birthday Party. Nonsense, of course; basically what they'd done was to mix enthusiasm with simplicity and carve out the most extraordinary racket. GG were their own monster.

Because, make no mistake, if you'd been weaned on Countdown, MOR FM or even cute postpunk stuff like the Models or the Reels, GG were an acquired taste. Thing was, we grubby creatures rather loved them. I saw them far too many times, and I was always sober, unlike, I now discover, the majority who - I am told - downed the equivalent of a six-pack at home before sallying forth into the rackety night. This may partly explain such extraordinary scenes of spontaneous slamming, with everyone skidding over an increasingly muddy parquet floor at Flinders Uni Bar, everyone falling over each other and heaving each other up, rather like the large ungainly kids at kindy.

So, back in the day, left to right: Charlie Tolnay, wearing a fiendishly happy expression as he tortured what looked like a small baby guitar; Michael Farkas complete with ghastly mask roaming about with a threatening presence; Dave Taskas with a strangely loose bass sound and a surly, 'gonna fight ya' expression; and finally George, who looked sober, tidy and as if he'd been plucked from an obsessive rockabilly outfit (you know the ones, they're never dirty and their clothes are spotless, perfectly creased and you just want got get ahold of a nice lemon meringue pie and...).

And then GG stopped. Dead, it seemed. And bands in which Charlie played aside (such as King Snake Roost‎) they weren't heard of for many years.

And then, perhaps losing patience with the insularity of Adelaide, a few years ago Nathan Dale convinced Grong Grong to reform. For whatever reason, Dave Taskas' place was taken by Nathan, who studiously copied Dave's original sound. Suitably encouraged, they began tentative yet punishing gigs.

Punishing? Well, yeah. First Charlie's got arthritis so it's physically painful for him to play his complicated note sequences, forcing him to take curious short cuts. Michael is on crutches these days, and it's simply extremely difficult for him to shift about. Most times he's on a chair ... unless he crawls, which is an extraordinarily intense thing to see.

George finally left and the mighty Michael Wilczek filled the seat. New songs began to develop, adjusting to Charlie's new method of playing guitar and Michael's thirty year isolation. If they get a new lp out you need to be in it.

So, before us now on a carpet just like the one in your local bank, stand Charlie and Nathan, with two seated Michaels.

Every now and again you see stupit competitions advertising some useless band to play in your living room, usually a band you'd pay to leave. But Grong Grong are ... well, like all the best bands, Grong Grong are something beamed in from somewhere else. They'd probably scorch your carpet.

Given that this is not a gig, not a performance aimed at a crowd, you'd expect this would have the introspective feel of a band rehearsal; yet regardless, there's always a brutal poignancy to seeing Grong Grong which you don't get from just hearing the songs alone. 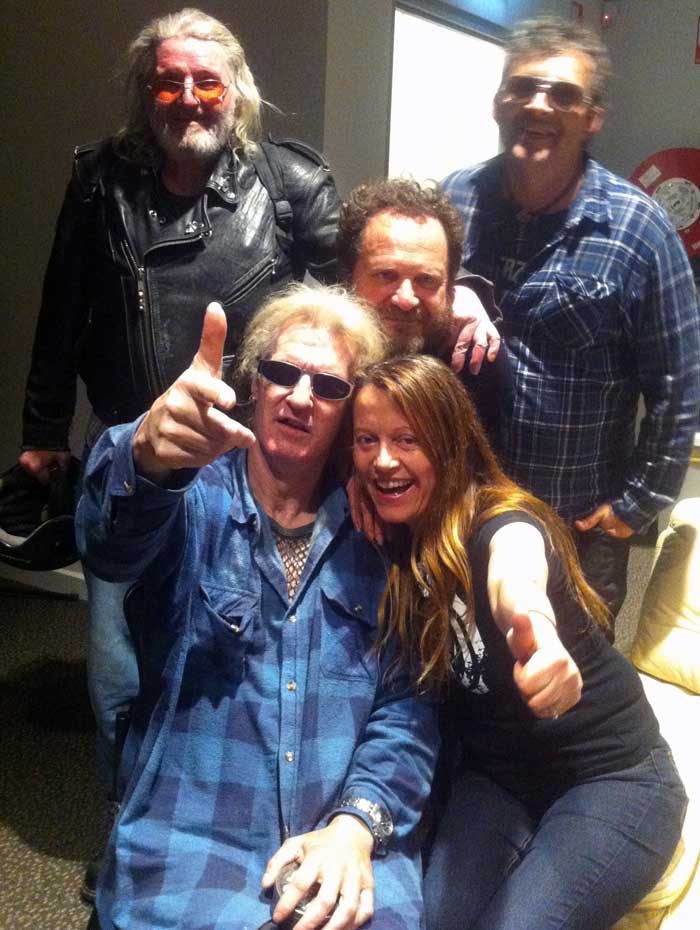 Tonight they've deliberately chosen to showcase old terrain, rather than their new songs, more to remind the listeners of what they are; yet what we hear tonight is much more precise than thirty years ago, with their dangerous nature clamped down rather than splaying out. If anything, they're more focused, more threatening and disturbing.

Jello Biafra remains a huge fan, and many years ago compared them with Flipper (which I thought back then was just wrong but ... Jello probably didn't have anyone else remotely similar to compare them to). Of course, GG's cover of Flipper's Sex Bomb didn't help. Me, I thought Flipper were great fun, but rather like the audio equivalent of a hangover.

GG are more like what you take to get the hangover... which, given they're all stone-cold sober, is some sort of achievement.

It's interesting to see them now, after nearly thirty years. The changes aren't the usual changes a band goes through. Usually things like this are either rather sad, or lacking in originality, with too many members bear unsettling santa-bellies with a soaked-in-rum-punch face.

So, left to right again. Instead of looking like a boulder draped in a tshirt with a toy guitar, Charlie is thinner, whiter of hair and still plays with a fiendish glee; instead of a boring old guitar, he now wields what appear to be lush, glittery hotrods. He brings two guitars to every performance because we all know he'll break at least one string on one guitar and another on the second, his playing then forcing him to adjust the songs accordingly. Tonight Charlie busts one string on the first guitar, two on the second. If he weren't so damn loud you'd swear he was chuckling, 'heh-heh-heh' to himself as he makes his nasty snarl.

Michael Wilczek is one of Adelaide's most remarkable drummers. Essentially, he's a bit like an F-4 Phantom, a superb weapons platform, remarkably fast and 'game-changingly' manoeuvrable. Don't get me started on his guided missiles and napalm canisters.

I saw several things tonight which I'd never seen before. Michael Farkas sang and played his sax tonight without his mask, which produced the astonishing effect of both humanising him and making a him far more intense presence. For the first time in years I can see what a decent-looking lad he is, with a leonine mane of white hair and powerful concentration. Stuck in his chair, Michael channels his frustration and anger into his vocals and sax. Be interesting to see him without the mask onstage, you won't want to get too close.

And then there's Nathan, whose sinewy bass ripples shove about the place like a drunk uncle at an engagement party. Nathan knows GG is secure now that Farkas and Tolnay have resurrected what many thought was a corpse, jolted it full of violent energy and sent it dancing across the airwaves.

Speaking of dancing, yes, there's always one, and she really couldn't stop herself from bouncing in, causing the band to audibly lift their spirits a notch. First time I've seen the band all laugh and smile, ever. And there's photographs to prove it.

Which is, of course, what it's all about. If you can't invite them to play in your living room, drag 'em across the country to play in your local pub, just to 'raise the consciousness' of hopeless bogans.