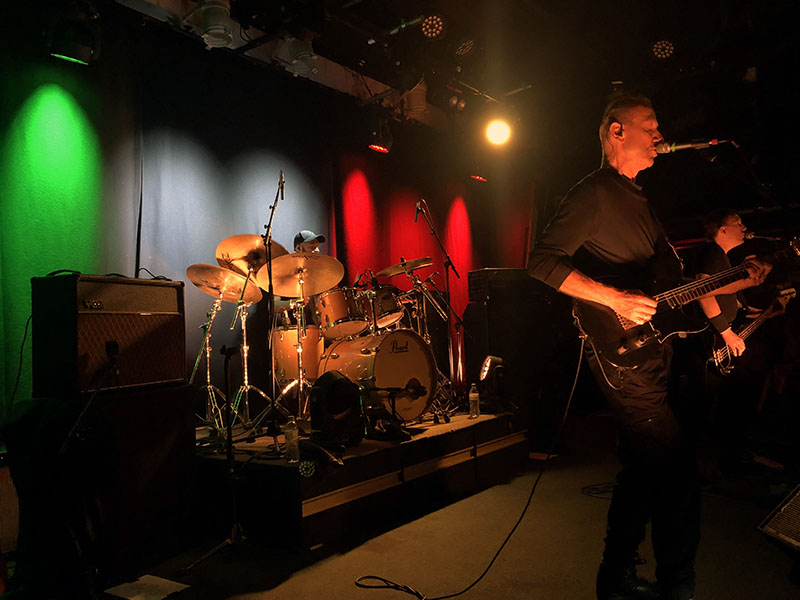 To The Gov once more, a place I'd inhabit a lot more often if I were able because the place is simply splendid. Their staff are uniformly excellent, too; whoever does the hiring never seems to put a foot wrong - a remarkable feat in a competitive and constantly shifting industry.

Back in 1979, The Stranglers toured Australia, twice. And I was, essentially, a schoolboy without the means to go and see them. These gigs were quite huge at the time, and I wished I'd seen them then, and now I wish the same thing. Missed a couple of other gigs I regarded as critical at the time, too. However.

Going along to see The Stranglers these days would, I suppose, be fun. But, even though I do have some of their later LPs (ie, without Hugh), I'm really not that interested. Going to see The Buzzcocks, well, how could you not love that fantastic time-tunnel. But that's ultimately what it is, time tunnelling.

There's always a weird, unrealistic expectation put on the band with a past; they can either pander to the expectation or simply continue along their creative path, and hope that people are listening. There's an amusing moment in a recent interview, where Hugh refers to The Stranglers' recent tour of Australia and New Zealand; "It’s a calling card for me, they go and say here we are and then I can come after it and say here I am so it’s fine. I think it’s a mutually beneficial situation." 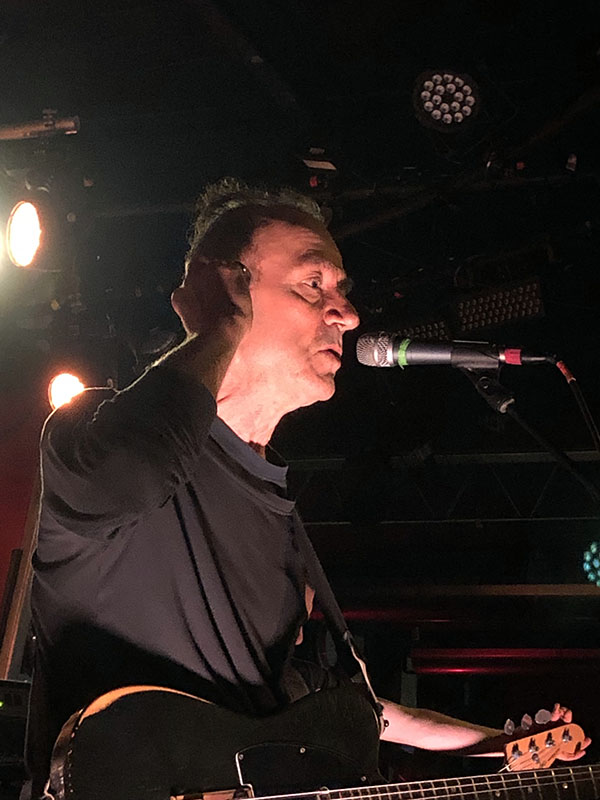 Actually, I'll throw this fabulous quote from the same source: because it was cricket which made Hugh realise that he could quit The Stranglers. "It was a cricketing moment that I watched on television that made me do it. There was a fast bowler called Devon Malcolm who used to play for England and he was a terrible batsman, well he came in to bat the night of the last gig I did with Stranglers and he hit a six which no one was expecting him to do. When I saw him do that, it really gave me the courage to say “well, this is my last gig”. So I did the gig and then the next day told everyone I was leaving."

This tour of Australia is to promote Hugh's new LP, "Monster", which has been getting increasing amounts of attention; naturally, he's used his back catalogue (ie, The Stranglers) as bait to get us in the door. The info page on The Gov's site advised us to get there early as there'd be no support; instead, Hugh would do two sets.

We got there early to discover we weren't the only ones; there was a sizeable gang of oldies and a gang of serial liggers were clustered in their usual spot; Dimitri, Col, Jeremy and Rick, all lined up clutching the crash barrier. We settled in next to them.

Before I start I'll have a short whinge. We all know that some people have no idea at a gig. Years ago, when I first started going to gigs, fights would break out. Often, they'd be over the most dopey of things; 'I was a punk before you were a punk' was one of them. Other reasons were that the berk next you was being a right jerk and, finally, the bloke next to him would turn around and bop the offender.

Now, I'll never do this; but I think perhaps the buffoon who spent both sets evening hollering unhelpful, over-enthusiastically chummy comments at Hugh who (like most musicians who play at volume, wears special earplugs which retain the music without the volume) couldn't hear him anyway. Apart from the constant flow of intermittent yips and yowps of delight, ("Hoo!", surely, is some weird American import which I wish people would just mail back to Arkansas) there were far too many hollered suck-hole comments (such as "One of your best, Hugh!"). Put together with misremembered lyrics and mistimed sing-a-longs, and also apparently lecturing some poor woman alongside as the band plays ... mate.

One day, and I suspect (and pray) that that day will be soon, you will irritate a bloke who will turn and tell you to shut up. You won't because you don't think you're an annoying prick. And you'll end up in hospital. It's too much, mate; you look and sound like you're trying far too hard to enjoy yourself and  you're telling everyone else all about it. Stop it, you infernally inadequate bum-button. I promise you, hospital food is not very nice, and pain-killers make you woozy.

Back to Hugh. He's here, as he explains, to promote "Monster", his new LP (which also has a second disc of acoustic renditions of Stranglers classics). It must've been about 10 years or so ago that I saw Hugh play an acoustic set at a small venue in Adelaide; I was rather impressed, partly because of the way in which he'd taken liberties with (sorry, 'rearranged') his songs so that they fit the form, and done so with a deadpan humour.

So, while I was looking forward to seeing him again, this time with a band, I confess I haven't kept up and have no more idea of what to expect than if I were to see Pink. The LP before "Monster" was "Totem and Taboo"; and he's also released two novels, and two autobiographical works; "Window on the World" and "Arnold Drive", and "The Stranglers - Song by Song" and "A Multitude of Sins", respectively. These are things I need to own.

Simple. Hugh made my life extremely easy by being rather wonderful. Sure, I could point out that he's only a couple of years younger than Iggy and criticise him for not bounding out topless and longhaired, smearing peanut butter over his chest and walking on the audience's hands ... but Hugh never did that. Always had a quiet dignity onstage. A reserved power and strength. Knew his worth, didn't over-egg the omelette. 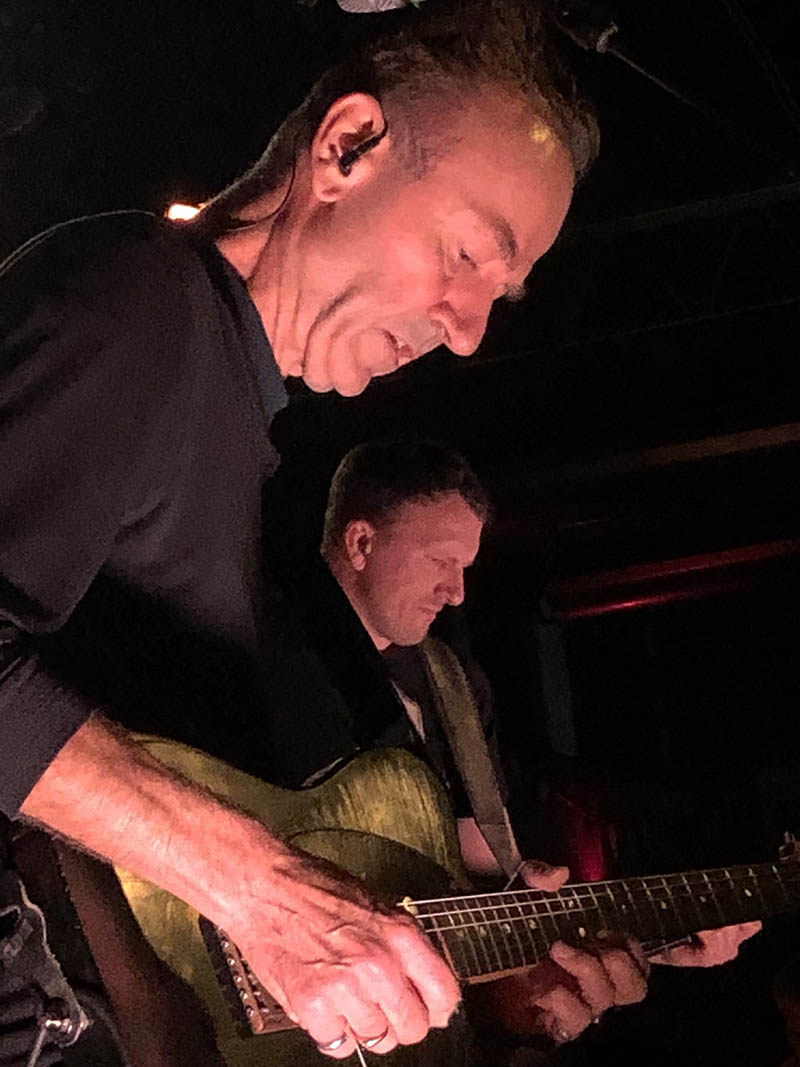 The first set begins with the band walking out in plain black, checking their instruments, then simply launching into the set. Three songs before he does that rather good audience banter thing he's well-known for. The songs all stand on their own, several have us laughing - they'd be mostly unfamiliar to the crowd. Yes, sure, some people scuttle to the bar, but the vast majority are glued to the spindly bloke onstage. Years don't 'fall away' at times like this; on the contrary, we are reminded of how far we've come and what we can achieve if we pull our finger out.

One more interesting thing is that the music still physically moves him. The band come out and there's a livid, strong connection between them. Never seen these chaps before; there's a drummer (name of Windsor McGilvray) and a bassist (name of Pat Hughs) and they're absolutely lock-step. Also, they're all into what they're playing. They're concentrating, and as far as I can see there's no fluffs. The arrangements aren't what you might expect, but the songs themselves stand proud because of the arrangements. This first set is a mixture of songs from his solo years, and it's just fine.

Look, I was unexpectedly very, very impressed with the first set. And I reckon you will be too. This ain't memory lane, not a man who's a slave to the back catalogue (the way The Stranglers are today, and the way The Buzzcocks were), but a man moving forward, always setting himself challenges and goals - and meeting them.

It's also a clever way to re-present The Stranglers. After the first set, see, we're not only accustomed to the three-piece but positively looking forward to the second set. And, you don't notice that Greenfield's organ isn't there. That's not to diss Greenfield, or those early songs, but to emphasise that the re-interpreted versions stand well and truly on their own as songs (the reworked "Thrown Away" is a damn fine song, better now than I remember it).

Also, these old songs stack up damn well against his more recent songs. There's a distinct thread of commonality, too; dread wit, intelligent and economical playing to keep things moving rather than waggling the guitarist's ego. Also makes us realise a few things about the older songs - for example, I was startled to realise that 'Goodbye, Toulouse' and 'Peaches' both might have originated with reggae riffing (I'll have to get those autobiographies).

The sets were, as they appeared on Hugh's set list (which Bob snaffled afterwards):

If you can't immediately tell what the songs are as above, that's another excellent excuse to go for a perusal of your Stranglers LPs and your swelling collection Hugh Cornwell solo CDs.

At the very least, you'll be making tracks to the next few gigs in Australia; apart from anything else, it's been ages since the man was down here last, and who knows how long it'll be next time.