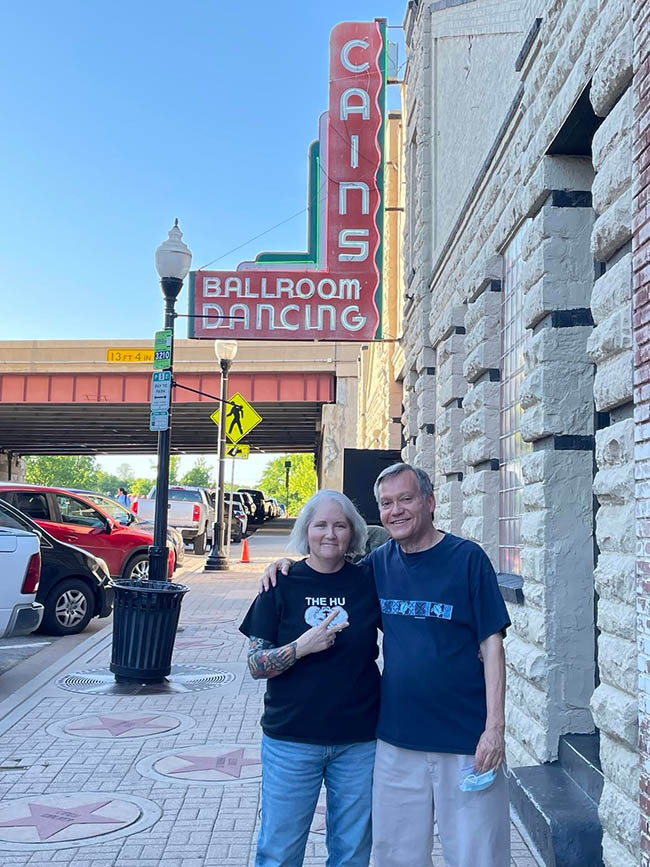 Upon arriving at Cain's, there were a number of good friends that greeted my companion, Dana Moss, and me. It was a standing room only, 2,000-plus crowd.

As the lights dimmed, the audience cheered as Patti made her way to the stage. She and Lenny Kaye started off by playing Bob Dylan's "Boots of Spanish Leather" with acoustic guitars.

The thing that struck me the most was that she is singing so well these days. The sound man at Cain's got a nice clear mix on the P.A. I could hear the words of the song clearly.

This was followed by a storming version of "Free Money". Afterwards, Dana turned to me and said:  "I hope that I have that much energy when I'm 75-years-old".

Smith paused for a few moments with a smile on her face. Finally, she said that she felt a strong sense of elation. She continued by saying: "I've loved this place since 1978 and that love hasn't diminished".

Her current band consists of Lenny Kaye on guitar, Jay Dee Daugherty  on drums, Jackson Smith on guitar - yes - the son of Fred “Sonic' Smith” of the MC5 and Patti – and Tony Shanahan on bass guitar.

The band themselves did one song with Lenny singing "I'm Free” (by the Rolling Stones) with a brief interlude of "Walk on the Wild Side".

Smith did talk at length about the influence that Bob Dylan had on her life. She shared a story of how, as a teenager, she took a bus ride to see him play in concert.

Among other songs played were "Free Money", "Kimberly", "Nine", "Pissing in a River", "Ghost Dance", "Because the Night", "Dancing Barefoot", "One Too Many Mornings" (Dylan) and "The Wicked Messenger" (Dylan).

Yes, Smith and her band are mature. however,  they are no less than engaging. She remains a charismatic performer.

The whole audience was behind her. Smith and band played a 90-minute set. It's been some time since I've listened to the songs from her first four albums. I really enjoyed hearing them again.

The show ended with a rousing "Gloria". The encore was "People have the Power".

Truly, it was an exceptional evening and I thought that Smith and her band were outstanding!