History is a harsh mistress and the Stones went on to become the world's best-known (some would say best) rock and roll band while the Pretty Things became a comparative footnote. Significant, but a footnote all the same.

The Pretty Things tasted success but never cracked it in the big league like the Stones did, despite patronage from some heavy hitters including Led Zeppelin. They last cracked the UK single charts in 1966.

There's no shame in any of that - there isn't much room at the top and very few bands get as close, in relative terms, as they did. Their influence, on the other hand, is undeniable. As gritty blues rockers, through their psychedelic years, as hard rock would-be stadium stars and as renewed and revitalised superannuants in their dotage, they've given rock and roll a lot.

Fifty-five years after they first trod the boards, the Pretty Things are winding things down - at least as a live, electric act. They seem likely to keep recording and will do the occasional toned-down set. That their farewell tour would take in Europe and their soon-to-be-Brexited home country was a given; Australia's inclusion is our biggest break since we ducked the GFC.

And so to Marrickville on a Wednesday night. The initial signs were not good. The desultory "crowd" milling about on the downstairs forecourt of The Factory Theatre seemed sparse just 40 minutes out from doors. Familiar faces were also thin on the ground.

Not meaning to be unkind here, but walking sticks were popular. Yes, we'll all be old one day if we make it that far, but some of these blokes looked like they saw the Pretty Things' first London show in 1963 and didn't have to show proof of age at the door back then to get in. And a few punters resembled those characters who religiously remember the date of every record collector fair in this town but can't recall the last time they used deodorant.

The Pretty Things played this same room five years ago. Anyone who saw them then had to be turning up tonight. And they should have been bringing five people each with them. That show was so stunningly good. Tonight deserved to be sold-out.

It's said you should only worry about the things you can change. It was probably said by some hippy. Or a stoner. Let's have another beer. Even if the tap's gone bung and the service is painfully slow.

A couple of Cooper's Pale Ales later and a move upstairs for Tumbleweed's support set reveals the room to be comfortably filling. Have they built a secret entrance? Where did they come from? 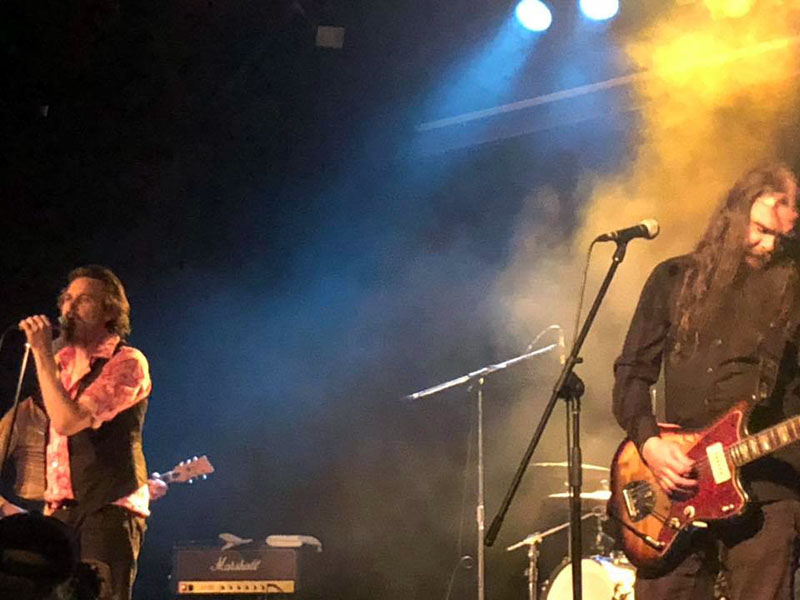 Although they wouldn't have been my first choice as a support - Spain's Los Chicos is inexplicably playing in competition to an almost empty Lansdowne Hotel a few kilometres down the road - re-born '90s stoner rock poster children Tumbleweed make things interesting via a set sprinkled with the familiar, the recent and the odd inspired cover like "Mr Pharmacist".

Richie's voice seems a bit ragged around the edges, maybe a side effect of solid gigging of late, and they have a tough task on their hands to warm up a crowd more interested in the headliner. You know what? The Weed does OK. The guitar sounds from Paul Hausmeister and Lenny Curley in particular are raw and righteous and they get a warm response.

There's probably 400 people in by the time the main act saunters on stage. It's an identical line-up to five years ago: founding members Phil May (vocals) and Dick Taylor (guitar), guitarist-blues harpist Frank Holland (actually another veteran - he has 30 years broken service after initially joining after being a May solo sideman) and the young gun rhythm section of Jack Greenwood (drums) and George Woosey (bass.)

The band's doing this tour on hired backline and borrowed instruments so a road crew is a luxury on a par with soft toilet paper in a back-streets Bali bar during end-of-season footy tour time.

Somebody plugs in a lead and the telltale red light lights up. We're off and running. 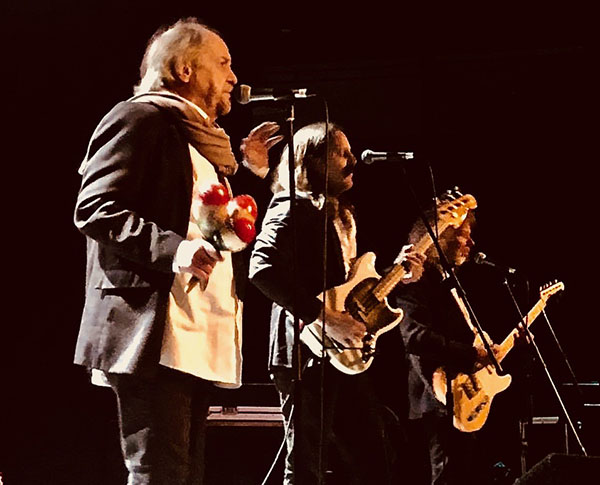 "Mr Evasion" opens the set. No need to give a blow-by-blow description here. It's a set back-ended with the punk-ish early material. "SF Sorrow is Born", "Defecting Grey", "Baron Saturday" and "She Says Good Morning" (all from the world's first concept album "SF Sorrow") are centrepieces.

There's nothing from the wonderful "Parachute" (no surprise there- Dick Taylor had quit by then and wouldn't be back for a while) and there's a substantial homage to the blues masters, from whom the Pretties drew their name and original inspiration.

It's Taylor on slide, Holland on blues harp, May on vocals and Greenwood on percussion for the first blues interlude. There's a medley (based on "Mona") later in the set. As much of a wizard Greenwood is on drums, his solo was an anachronism that could have been shelved in favour of another song. Then again, the Pretty Things have earned the right to play whatever the fuck they want. 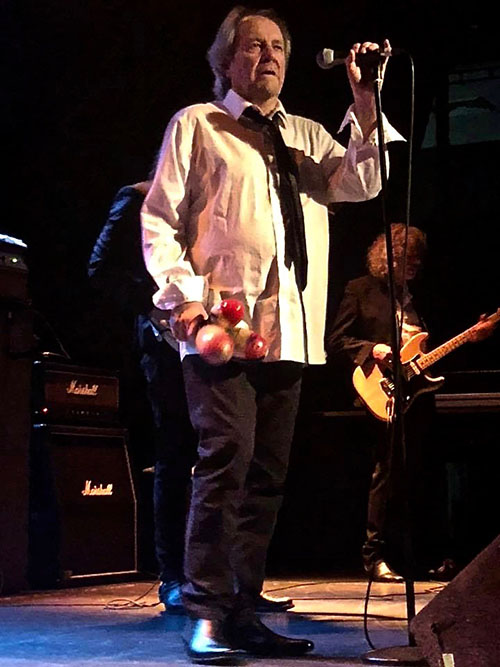 You've got a lovely bunch of coconuts but Phil May grips his maraccas. Keith Claringbold photo.

So a few observations: Frank Holland is a lot more than a sideman. He's an absolute star on harp and although Dick rightly gets the lion's share of solos, his own occasional time in the fretwork spotlight is first-class.

May's voice hasn't lost much and with the wisdom of a veteran, he paces himself. One fleeting appearance of an asthma puffer is the only sign of the emphysema that's apparently making long-distance travel difficult for him.

Taylor is a wonder. No other statement needed. It's not just the number of times he's been around the sun. His guitar skills are stunning, even to us non-technicians, as he crouches over his instrument. He's all superb sustain and tone. His fingers look like they could crush small countries. 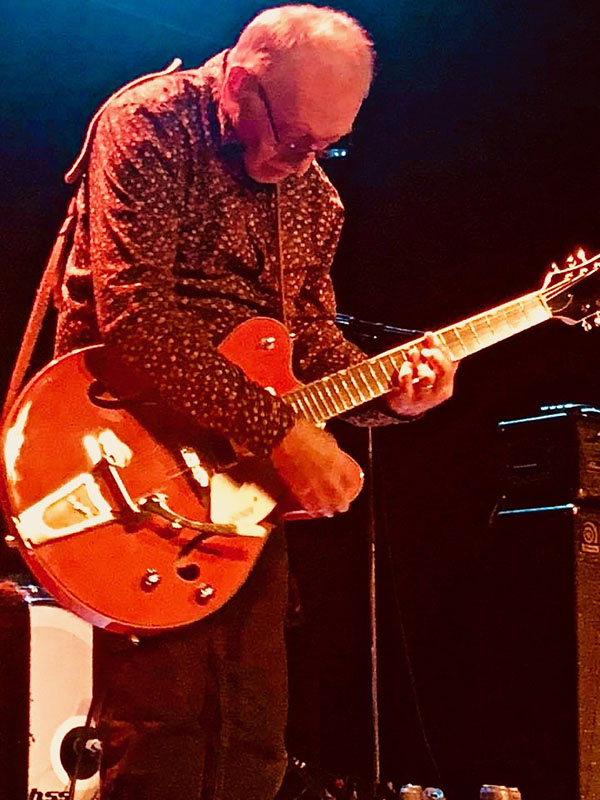 They play for almost two hours. It's still over too soon - even on a school night and I'd been up since 5am. Maybe the Pretty Things didn't have the same swagger as five years ago - I might be imagining that but if it's true it would be reasonable to expect - but if you didn't love them tonight then you're sadly lacking in taste and grace.

The band offers to meet people and sign stuff at the merch table as soon as they can towel down. Considering all that they're selling is a T-shirt and not CDs or the ubiquitous vinyl, it's a nice touch that's not driven by commercial considerations. Dick Taylor is spotted making his way through the crowd almost as soon as the last note has faded. That's generosity.

It sounds wanky to prattle on about being on the presence of greatness but Mama, just Keep Your Big Mouth Shut. Mainly because it's true.