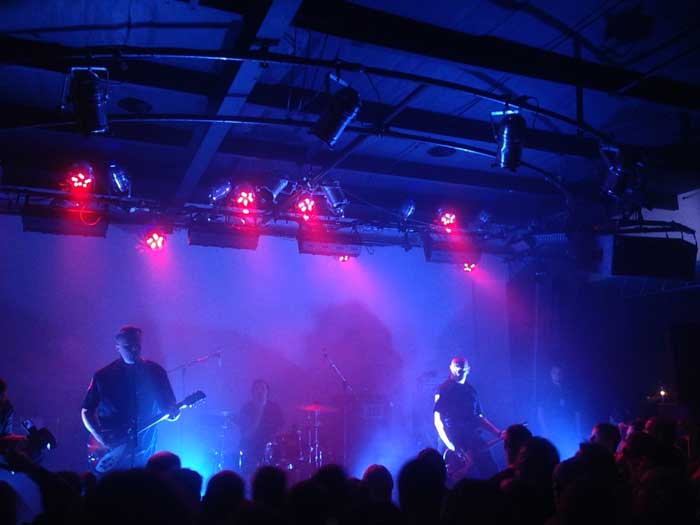 It's a rather jolly evening. All around me are rather scruffy looking men (completely unlike myself, oh yes) with seven month-old beer babies (again, oh yes) who bounce off each other, hug and kiss each other in positive delight. Low rider handshakes and warm, manly embraces abound between long-lost mates and total strangers. Some gentlemen are well on the way to bursting breathalysers (I have two pints and get told off for overdoing it). Paul Slater, the man who introduced me to music, and also the man credited with going to more Fear and Loathing gigs than any other human being (including the band) is there, wearing a big grin. There's a lot of 'hell, are you fifty this year as well' and similar. Sean from the Billion Dollar Bums is Mark of Cain's guitar tech and he looks in terrific form. Leathery individuals in leather jackets lurch past. Men wearing their floordrobe's finest waltz with each other. An old schoolfriend comments that the crowd hasn't changed. The few women mostly look upon all us mis-shapen, santa-shaped men with hair in the most preposterous and unnatural places with patronising, amused smiles.

She and I find ourselves a spot on the ledge overlooking what is likely to be a rather busy pit before the stage. No crush barrier.

The Gels were a period in Adelaide's musical past I completely missed, and a man of my acquaintance assured me that tonight they sound a hell of a lot better than he remembered them. They're good, yes. They're fun. Basic r'n'r delivered with a sharp edge and ... well, I'm very sorry, but I didn't take that much to them, although they look like great blokes. The bass player hammered the strings and wore a brilliant 'red skull' Perdition tshirt (which was nice because Mr Perdition himself, Mark Hayes, was in the crowd), the lead guitarist has a damn fine haircut and the bloke on the other guitar looked like a banker dressed for a rumble, if you can imagine such a thing. The drummer seemed to be having the most fun, hair and arms everywhere.

Eventually Fear and Loathing (FAL to people who can't be bothered spelling, like, erm, Fear and Loathing) emerge from the shadows and scramble up onto the stage. From the crowd. Not from backstage. They plug in and stand about, a bit surprised to be facing more than thirty people all in the one room at once - what with them onstage and about to play and all and all them people not running away. The mixer finally gets Chris' attention and they do a rather rudimentary sound-check, banging away hopefully. At this point I realise that these behemoth religious artefacts are for the exclusive use of Mark of Cain. Mmmmm. Well, they probably own them, and it is their game here after all.

Right. Fear and Loathing lost guitarist Dave the Taxman some little while back and since then they've rearranged (if that's the word) their songs to suit. This is much more hard work than it looks, because Dave added an indefinable something to the mix which requires copious quantities of beer to identify. But anyway. They start and, frankly, they're terrific. They sound great, Jess is on fine form, bringing out the best from Chris and Hermann). In fact, Jess is bloody great, shoving so much emotion into his vocals you fear for him. At one point I thought he was going to bring something up something red and messy, but fortunately the moment passed. 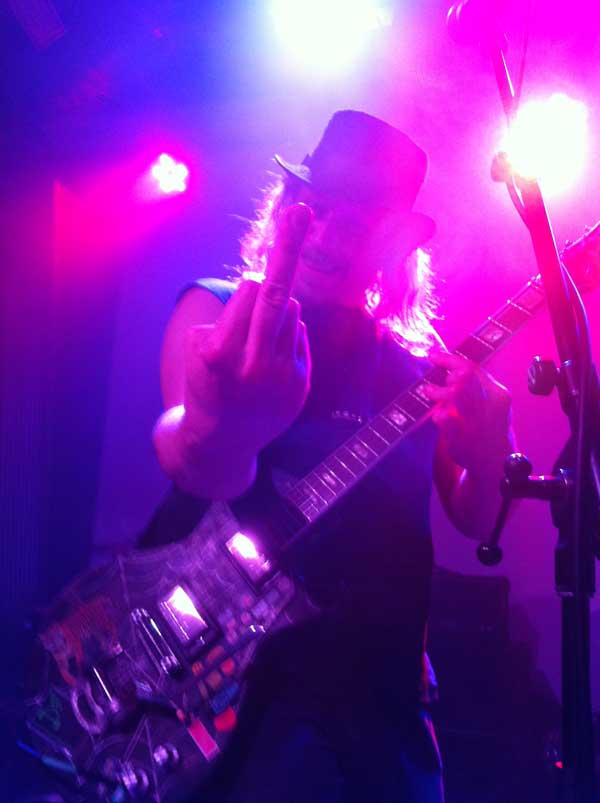 Behind them, Terry is his usual powerhouse self, precision guaranteed to the point where, if you ever hear that he's playing drums in any band anywhere, you must see that band. Without Terry... and then the smoke machine, or dry ice machine, or whatever it is, cranks up and... it's like one of those alternate realities where you half expect screaming girls to descend and Molly Muldoon to hop onstage for a duet in a pastel frock. It's certainly weird seeing these extraordinarily determined men appear like 7ts pop stars; they may refer to themselves as Australia's longest-running punk band but they're kinda like a heavy metal or hard rock band without the stupid occult and macho fluffery (and all the other cliches); Fuck You I'm God or Raw Sex are songs of today. In a perfect world they'd be scaring students at BDOs (sorry, can't be arsed spelling it out). They're over all too soon, with a rather flash version of Kawliga. Stars, as far as I'm concerned. I may have mentioned this before.

One thing I must make crystal before I continue. Anyone creative who has managed to make their creation get them a career - however successful - away from this dreary bumhole of a town, deserves an Order of Australia, or better. For example, certain bands came through here and inspired people not just to make music, but to bugger off. And quite right, too. With the power not invested in me, I hereby award a few OMs: step forward Ash Wednesday, Clare Moore, Liz Dealey, Chris Willard, David Creese, Martin Bland, Don Walker and, yes, even the great squawker himself, J***y B****s. They all deserve medals, money and more. There are a few posthumous omissions, but you get the idea.

So, power to The Mark of Cain, who could have had the head of the world upon a silver platter but decided to get on with their lives. And, some years later they're playing again. And it's not like a poxy reunion, a band trundling through their greats or almost-forgottens or some stagnant 'play your famous LP for us, here's the dosh' deal, it's like the Mark of Cain never left. John Scott still looks like a Mussolini who'd rather be doing something else (possibly head-butting trains, but I didn't say that) and Kim still looks like he's found outraged, hurt words for the inarticulate masses. There's still a drummer, this time Eli Green, behind them, but it's the Scott bros who are The Mark of Cain, and we all know it.

Put simply, The Mark Of Cain (I am not using the somewhat diminishing anacronym the young people (apparently) use: TMOC, pron. Teemock, because, well, just figure it out) deserve several medals. Not only have they made a thing the world wants and needs, and are able to make money at it (hands up all those poor creatives - christ, there are a lot of you fuckers out there. Us fuckers, I mean), they not only found the train station and got on a train, they came back and are still able to find the station get on the train again. I mean, stunning stuff.

Now, I read with interest the current Wikipedia article about The Mark Of Cain, and although they acknowledge (c'mon, of course they wrote most of it) their debt of style to early Joy Division (still audible, too) they don't mention the night Big Black (ie, Steve Albini's most influential band) came to Adelaide in 1987. I can tell you it was a big deal: Mark of Cain were on the bill, FAL a bit higher up, and various others. See, hardly anyone knew of BB (sod it) at the time in Adelaide so it was with great excitement that a few of us awaited the appointed hour. For most people in the room, it was apparently a revelation. Stylistically, BB were right up there at the time. The audio tape I've heard has men squeaking in excitement between songs and raving like small children to each other afterwards. It's rather wonderful.

The Mark Of Cain altered their approach, their style, very soon after that gig. That doesn't mean they copied BB, they didn't, but I believe it to be the basis of their stylistic scythe-cum-battering-ram with a particular kind of confessional vocal approach which has proved so popular. In fact, I will go further: The Mark of Cain have improved on the communication and stylisation pioneered by BB and now reach, and touch, far more men in a very deep, emotional way than BB ever did, or could. Albini, I thought, was too much of a smartarse to really create (let alone master) an empathy with the audience which Kim Scott does so fluidly - Kim's lyrics and delivery cut right to the heart of men, another reason why this band are so beloved by so many.

So. If you've seen The Mark Of Cain before, to some extent you know what you're in for. A thorough pounding, musically, John's slicing Rickenbackers cutting right across Kim's thunderous bellow, and a spectacle to rival a Biblical epic. They have a much richer set than when you saw them last, and the set ranges from the very old to the very new and no, I'm not telling. What you need to know is there's more colour and shading. Every song isn't as similar to the last. Not that that appears to matter to the flailing, shoving drunken men who turn the front of the stage into a scene reminiscent of a small room filled with excited wolfhounds. Unlike a lot of pits, this one looks like a lot of fun - I haven't seen people crashing to the floor being picked up with conciliatory gestures every thirty seconds in a long time. A few folk down the front get a bit miffed and flee but that's not surprising. What is surprising is the round table near where I'm standing. It takes most of the set before it finally goes flying, spraying booze and plastic glasses everywhere, and then - get this - for the rest of the evening dishevelled men emerge from the flailing throng to put their drinks down, flail off, return and wonder where their drink went, go off for another (and on and on it went). The Mark of Cain are a very violent, but very friendly, contact sport.

I must make mention of Brecon James' extraordinarily professional camera crew. Five-strong, they braved the crashing bodies at the front of the stage until the cameras were endangered. Cool, collected, determined, they were damn fantastic. I can't wait to see the result - ask him what the hell at heapscool.com or engage him to film your band, there's plenty of examples on the site including the Superjesus' recent reunion. At one point the three film cams were on the edges of the stage, two official still photographers were lurking about near the drum kit, and two bouncers were busy looking awkward and out of place near each Scott bro.

The Scott brothers completely ignored them, as they had been ignoring the cams all night. They had a job to do, and they got on with it. An incredible sight.

The band return after much noise and do more damage to our eardrums.

We reluctantly - and rather deafly, it must be said - slap bellies, hug and promise to reconnect.

I refuse point-blank to be santa for a low-budget musical and, rather giddily, we head off to find our car.

Tags: of, live, the mark of cain, tmoc, fear and loathing, the gels