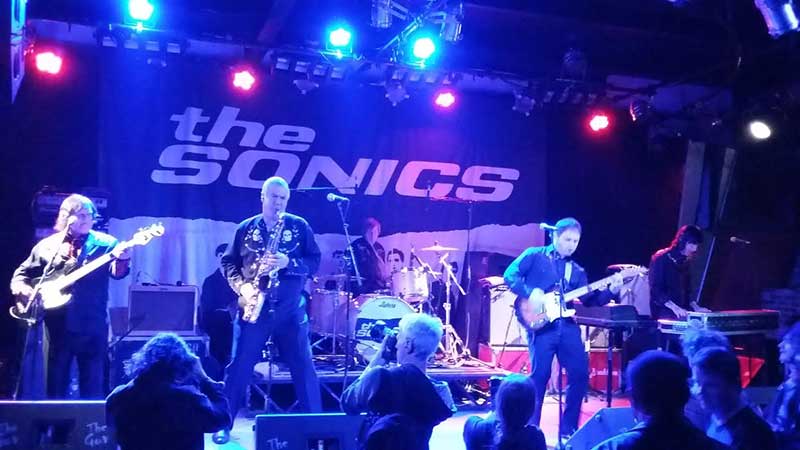 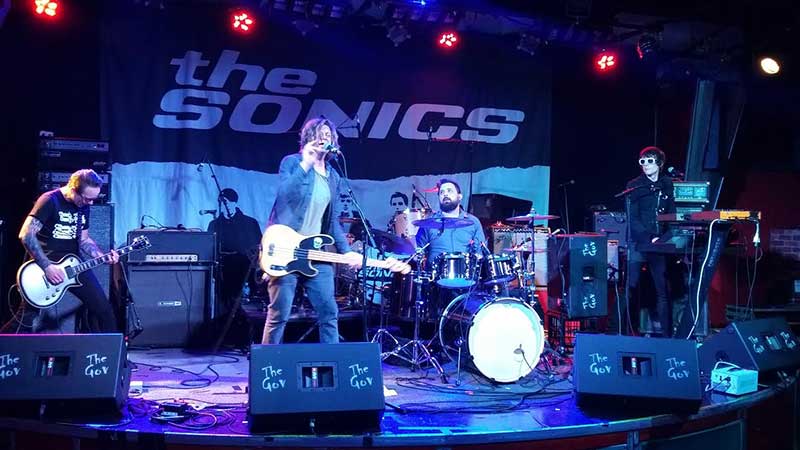 Substract-S prepare the crowd for The Sonics.   Robert Brokenmouth photo

The backstage curtain twitches and a Sonic's hand opens a gap, watching, as did Pete Shelley a few months ago, as Sonic-S get down and drag a cold, shivery Adelaide crowd out of the smoker's garden into the fug of the front of stage.

There's two of us writing tonight: I'm the old fogey. When I was 15, in 1978, I first heard The Sonics on a compilation called “The History of Northwest Rock”. Now, there's some great stuff on there (and a couple of horrors, like a version of The White Cliffs of Dover), including the Frantics and the Kingsmen (whose original version of Louie Louie stopped my teenage heart...) but it was The Sonics who really got under my skin. Fuck, they were radical for 1978. Full on.

Digging in for the history, I realised that bands like The Remains and The Sonics would have burned holes in (never mind blown off stage) bands like The Kinks, The Beatles, The Stones ...

The Sonics you see today is not the same as The Sonics of 50 years ago. How can it be? People change and 50 years of living rarely leaves someone fit and healthy enough to be able to continue playing like they were 20. Yet The Sonics as we saw them tonight held their own and were a powerful representation of the original.

For Record Store Day 2015, the Sonics recorded a live performance at Seattle, released the following RSD as “The Sonics Live at Easy St”. Own this, plus 2015’s “This is the Sonics”, and you will have an accurate representation of the current lineup. Going to The Gov tonight I was expecting to compare what I saw to the live album - not the albums from the 60’s. I was delighted to find that this group were able to play both the original and new material with the same tremendous force, making for an entire set with no weak sections. 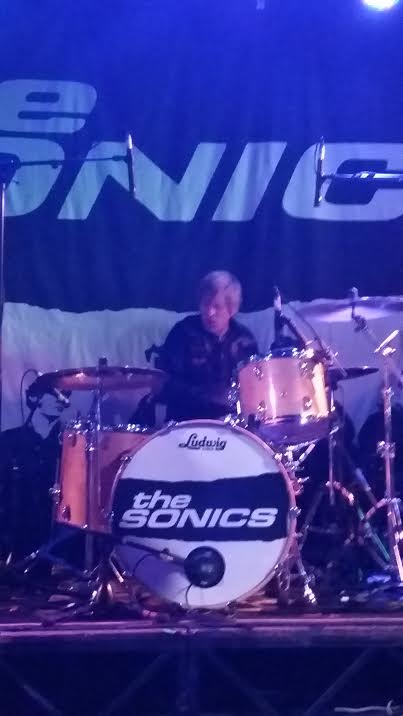 The current lineup of The Sonics matches the instruments of the original, the touring replacements being Dusty Watson for Bob Bennett on drums, Evan Foster for Larry Parypa on guitar, and Freddie Dennis for Andy Parypa on bass and vocals, and Jake Cavaliere for Gerry Roslie on organ and piano. Like many outfits who've lasted several decades, some members remain members but cannot travel with the band, so tonight Rob Lind, sax and vocals, is the only remaining member able to tour.

Unlike so many other outfits missing personnel but unable to muster that ... genie's spark ... which we've all seen all too often; or those ghastly reunions where the chosen band merely cover their purple patch in a competent but lacklustre display ... The Sonics not only put on an excellent performance, they worked for the crowd from the moment they walked on and gave, gave, gave to us in spades - and we gave back.

We'll say it once: it's partly the music, but it's the self-belief on stage, the delivery, the drive, the ability to give and the ability to give again which makes a great performance: every single man on this stage made us believe in a world we want again and again: The Sonics are no nostalgic creature, but since they were so far ahead of their time, right now they sound modern, dirty, vital, stabbin'.

Evan Foster was a monstrous player, packing a huge amount of power and drive. His Telecaster was wonderfully overdriven, and it sounded just like it does in the old and new records. The lynchpin of the band however was Dusty Watson's impeccable, drumming. Check out his track record, it's extensive. He flung himself around in a frenetic state with precision and great power; his ability to crash and rebound over and over speaks volumes: those signature rolling drums are not easy to do, and Dusty propels the entire band into a higher level - The Sonics, as they stand, are a powerhouse.

We all danced very hard and yelled far too much. My voice will heal in the coming days, but this night will be one I remember fondly for years to come.

If you ain't seen the Sonics, or you're fretting about the lack of 'original members' on stage: don't. There's a wealth of power and talent up there. Also, the surviving original members have a legacy, and they know what it is. There's clearly no way they'd let some lame, lazy version of the band they're still damned proud of go out on the road.