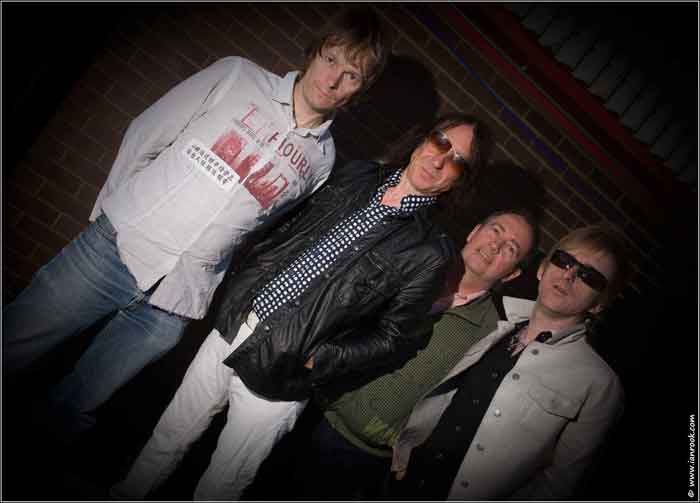 Buzzcocks can rightly claim to be highly influential, on both the UK scene and rock and roll generally. Conceived by art school student Brian Devoto, they supported the Sex Pistols on a foray north to Manchester and then came into their own with appealingly catchy songs like Ever Fallen In Love?, Fast Cars and Orgasm Addict.

Buzzocks are something of regular visitors to Australian shores so it was no shock to see them included on the bill for the second Dig It Up! Invitational, the Hoodoo Gurus-curated roadshow of influences and influencers.

On the eve of Dig It Up!, PATRICK EMERY cornered vocalist-guitarist PETE SHELLEY for this chat.

When, and where did you first meet Howard Devoto?

It was at college. Howard put up a notice saying he wanted musicians to do a version of Sister Ray by the Velvet Underground. And as I was one of the few people there who knew Sister Ray, I phoned him up. That’s how we started working together.

What’s the story of your mangled Starway guitar?

We used to rehearse in a village hall. After rehearsal one day I was doing a wild punky guitar and I took it off and threw it on the floor. And it split straight down, parallel to the neck, and it still worked. So I just moved the peg where you put the strap on ‘round to the back and it still worked. So I carried on using it. It was the ‘sawn off guitar’, as Malcolm McLaren used to refer to it.

You were studying philosophy about the time you formed The Buzzcocks. Did you see punk as a social movement with a solid philosophical underpinning?

For me, it was more that it was an art movement, because it drew a lot of inspiration from things like Situationists, and Dada, and Surrealists. So there were a lot of those types of ideas going on. And also who can forget anarchism? In some ways it was a way of grabbing creative control back from society. I would say it was about being an active participant in culture, rather than being a passive consumer. The whole idea of doing it yourself – whether or not you were any good at it. The very act of doing it would change the world – which it did.

What was the difference between the punk scene in London, and that which existed in Manchester?

The scene that existed in London, because that was where the industry was, people were trying to jostle and position for who was the best punk band. But up in Manchester punk was so few and far between, it was like huddling together for warmth.”

To what extent do you think that The Buzzcocks were caught up n Malcolm McLaren’s contrived image of punk?

One of the things we did was bridge the gap, because we brought the Sex Pistols to Manchester, the second of which was when The Buzzcocks debuted. It was reciprocal, so whenever there was anything happening in London we’d get a phone call from Malcolm asking us to play. That was just to make up the numbers, really – to make it look like there was were of people involved in the scene. There was really only a handful of bands and some stragglers and hangers on, when then started their own bands. But in the early days we’d be called in to make up the numbers, so they could have three bands on the bill. So it was good in those days, because we could have a foot in both camps. When bands wanted to get started in Manchester they’d come to us for advice on the practicalities of how you’d start a band, because it was about sharing information because you’d found out how to do it. So that was how we got involved with Joy Division – we’d go around and help them choose a drum kit.

Steve’s lyrics have tended to have a more overtly political edge, whereas your lyrics dealt with issues of sexuality in a much more considered, and overt manner than the average punk band. Do you think that the way you’ve addressed sexuality has itself been a political statement?

I think so. I always used to hate it when you’d hear someone sing a song on TV, but they’d sing it to a different gender than what the original singer was – they’d have to change the lyrics to take account of the change in gender in the song. I thought at least half your audience you’re cutting out, if you’re changing the lyrics. And also because the objects of my affection were of either gender, so it was natural for me to do that. And also because we weren’t expecting anyone to pay the blindest bit of attention to us, so it made it quite easy to do it – it wasn’t a heroic stand. It was just ‘this works best for me, so that’s the way I’m doing it’ – this is all in the spirit of punk.

What was the catalyst for you starting to play again as The Buzzcocks in 1989?

There were rumours that we going to get back together. My manager was over in New York, and he was approached by our old agent, Ian Copeland, brother of Stewart and Miles. He said ‘I hear the band is back together, so you should come to me, and I’ll put together a tour’. And our manager said we weren’t back together, but what kind of thing was he talking about. It was just a three-week tour, coast-to-coast, so we thought ‘let’s see what everyone thinks about it’. At the time the record company was releasing a boxset, so it seemed to be a good time. We called up everyone and surprisingly everyone said yes. We had some dates in England around Christmas 1989, and then out of the blue came an offer to play in Australia and Japan. So we thought we might as well do it – and it’s basically been like that ever since. There’s always been new places to play, and interesting events to perform at.”

Last year you reunited for a couple of nights with Howard Devoto. What was that like?

The second night was better than the first night, and I’m sure if we’d done a third night, it’d have been better than the second night! It was good that it was possible to do it – whether or not we do it again? I did say to Howard afterwards ‘if I ever come up with an idea like that again, just say no’.

Your last album, Flatpack Philosophy, was bristling with creative spark and political attitude. Are you still angry and/or frustrated with the world?

I’ll still shout at TV – just the crass stupidity of anyone who’s supposed to do anything properly. I may still be an angry young man, or maybe I’m an angry old man.

A few years ago you were reported as saying you were working on a new album, notionally titled The Joy of Life. Is that album still in the works?

Yes, it is, but it’s still on the back burner. I think it’s more relevant to go out and play the songs that we’ve got. Last year we did two shows with three different line-ups of the band, played about 42 songs, which is less than a third of the songs that we’ve got. And we still had people asking why we didn’t play certain songs. So instead of us making more songs not to be played live, I think it’s more relevant – especially now in the days of Internet piracy – David Bowie said you can’t fake the live performance, you can’t copy that. So going to see a band play live now is in some ways more relevant than making records.

Were you asked permission before the BBC named its music trivia show Nevermind the Buzzcocks?

No, no, no. It’s to do with the fact that they can’t say ‘bollocks’, so they chose Buzzcocks instead.

How did you end up on the bill for the Dig It Up! event? Are you friends with The Hoodoo Gurus?

Someone was saying that our paths may have crossed in the past. But the old memory’s not the same as it was, so I’m not sure of the chain of events. But it’s good that they’re doing the Dig It Up! festival, because it’s like a rock stars’ mix tape. So instead of giving a mixtape, you put together a festival of all the music you want people to listen to. And it’s excellent for us, because for people who only know ‘Ever Fallen In Love’ get to hear more of the band.

What does punk mean to you, 37 years after you first started The Buzzcocks?

It’s about enjoying what you do, and doing something you want to do, rather than trying to be a pop idol or appearing on a talent show. Those things are irrelevant, even six months after they’ve won. It’s really good when people do things because they’ve got a passion. Steve always says the reason we keep going on is so we can show everyone how it should be done.