Great to talk to you Andy. Firstly, some standard questions – who were your earliest musical influences? And what inspired you to start a band?

Andy Shernoff: For my generation it all started with the Beatles on Ed Sullivan, everybody and I mean everybody watched their performance. A few days after the show, some friends and I got inspired and decided to do a little presentation in class. We bought some Beatle wigs, slapped on ‘She Loves You’ and started miming to it. As soon as we dropped the needle, the girls started screaming and the teacher threw a fit and stopped the performance. My first rock and roll experience ... I knew I wanted to play music after that.

So I became hooked on rock music. I initially went through an intense Beach Boys phase, followed by the Stones, Kinks and Who. Eventually I got hooked on the hard stuff; the MC5, the Stooges and Lenny Kaye’s Nuggets compilation, all of which were direct influences on The Dictators. I’d never played in bands. I just dabbled, playing guitar to records in my room. It took running into Ross the Boss one fateful day to force me to make the leap. His confession that he was leaving his current band and was thinking of starting a new one, led me to audaciously suggest that I should be the bass player … even though I didn’t even own a bass!

I believe that you were publishing you own fanzine at the time (Teenage Wasteland Gazette), but when you did get the band up and running, were you aware that you had created a unique combination of hard rock guitar mixed with a proto-punk aesthetic, almost a cross-over blend before anyone else?

I knew we were doing something out of the ordinary but there was no way to predict the consequences. We formed in 1973, which was not a particularly fertile period for rock and roll. It was full of long-winded musical pomposity and sensitive singer songwriters. The fun element had completely disappeared because everybody was taking themselves way too seriously. That left a huge vacuum for the high energy, rebellious rock and roll that we loved and grew up on. It is important to remember that rock and roll was still a relatively new art form in the 70’s, so it was much easier to create something original. If the essence of R&R is three chords and a backbeat there are only so many permutations before you start repeating yourself, which unfortunately is the situation we find rock and roll in today. 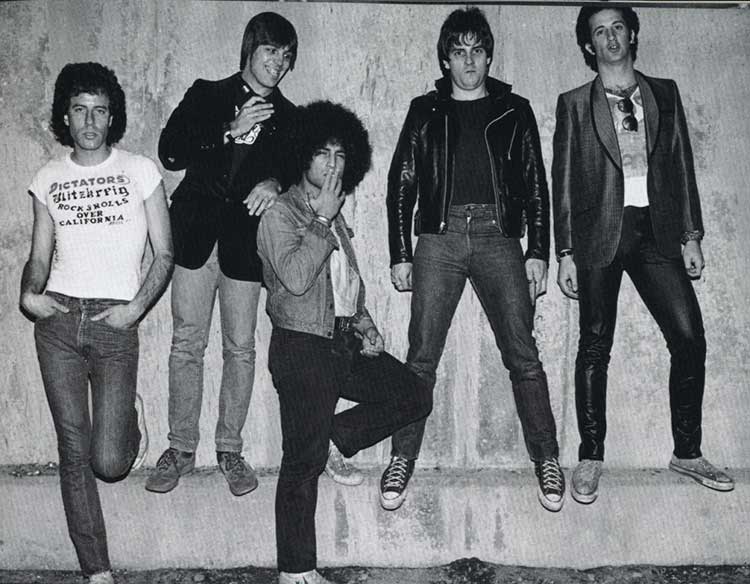 Do you think BÖC producers Murray Krugman and Sandy Pearlman were instrumental in helping you find your musical voice and style on record?

Murray and Sandy were the first people to support and encourage us even though there was absolutely no precedent or blueprint for what we were doing. We hooked up with them in 1973, years before CBGB’s, The Ramones, or any kind of “punk” scene existed… and except for Ross we were barely competent on our instruments. Those guys saw something in us and for that I am eternally grateful.

The songs you were writing featured some of the wittiest lyric lines in all of '70s rock (‘Master Race Rock’, ‘The Next Big Thing’) but do you think the irony / satire just went over the heads of the general record buying public? Were you disappointed when the early albums didn’t sell in big numbers?

Thanks, I was inspired by the lyrics of Brian Wilson and Chuck Berry and always felt they epitomized rock and roll. I wanted to capture the teenage experience as they did but from the perspective of a boy growing up in New York City.

I have always felt that The Dictators lyrical approach was our major contribution. Unfortunately satire, sarcasm and rock and roll didn’t inspire the masses, so yes it was disappointing.

On the first album you handled most of the lead vocals, with Handsome Dick Manitoba making various contributions. What was the thinking behind getting Handsome Dick out front as a full-time singer? Was it showmanship / one-upmanship / sheer contempt in the face of adversity?

Showmanship certainly lays a role but I think to be a great lead singer you have to have the desire to be the center of attention. Consider Iggy, Mick Jagger, Bono, even Bruce Springsteen. I don’t have that desire while Richard does.

Did you share an affinity with any of the other bands on the New York stage – the Dolls, Ramones, Television etc? For example it wasn’t until fairly late ('76/'77) that you got to play at CBGB, and then there was the infamous Handsome Dick / Wayne County confrontation that apparently divided the scene: you were either for or against the Dictators, no half-measures.

I did share an affinity with other bands. It was a very small scene, so everybody knew each other and hung out together. Musically I related more to the “fuck art, let’s rock” school of bands like the Ramones, the Dead Boys and the Heartbreakers but I truly liked numerous people in the other bands and have maintained friendships with many of them till this day.

I always found it interesting that even though all the bands were lumped together, no two bands sounded alike. There was no CBGB’s “sound”. The only connecting tissue was that everybody followed their own muse.

True, there was some tension at the time of the Handsome Dick/Wayne County incident but it dissipated and I don’t recall any lingering effects outside of the fact that The Dictators never performed at Max’s Kansas City, Wayne County’s home base.

(Note: The “infamous Handsome Dick/Wayne County incident” referred to above occurred at CBGB’s in March 1976 when a drunken Handsome Dick heckled County while he was on stage. Then the Handsome One approached the stage on his way to the men’s room (apparently you had to bypass the stage to get to the toilets), County took it as a direct threat, words were exchanged and County clobbered Dick with a microphone stand. Dick ended up with sixteen stitches in the head and a broken collarbone.) 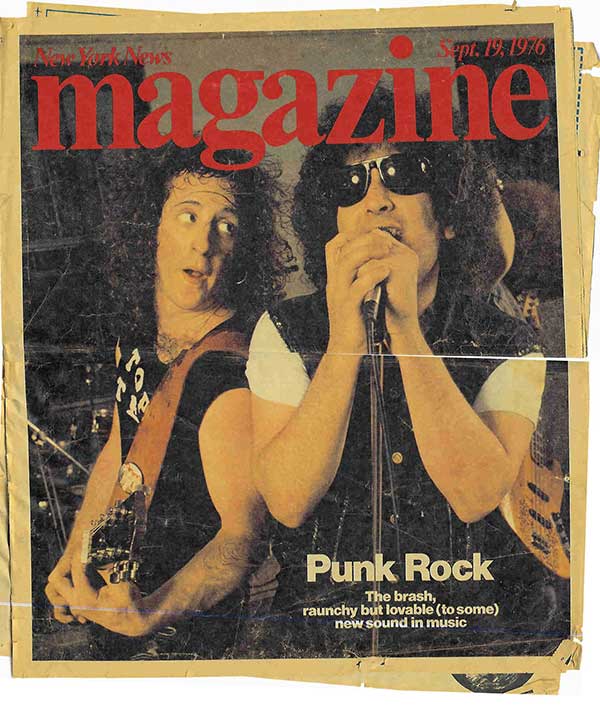 When the UK scene started to embrace the band and you toured there (and Europe), did that inspire you to come up with the Bloodbrothers album which in some ways is the strongest of the first three LPs?

Experiencing the intensity of the UK punk scene first hand was a total game changer in my eyes. Rock and roll had finally become the incredible life force I always thought it should be. While it was tangential in America, across the ocean the music was not only topping the charts, but it had extended its influence into fashion, art and politics.

When I returned from England my songwriting became more precise and focused which led to the simpler, more organic direction that Bloodbrothers took. By this time we had finally developed some skills on our instruments, which made the recording process easier and quicker.

I guess the band never really split up as such, but the reformation in the late 1990s resulted in a new level of acceptance – the D.F.F.D. album was a success, you toured the world, played at Little Stevens’ Underground Garage Festival etc – did that fire you with a real sense of achievement or validation that you had always been on the right track?

Over the years the band had played occasional shows in the New York area but around 1996 there was renewed interest in the band so it was either make a new record or become a nostalgia act. Everyone knows that when bands “get back together” the reunion records invariably suck, so it was a difficult, creative challenge. We hadn’t made a record together in 20 years, so the trick was to retain the outrageous attitude and youthful enthusiasm of the teenage Dictators while still maintaining our adult dignity. I also felt the legacy of the band required one more record. I think we broke the comeback jinx and I’m particularly proud that D.F.F.D. yielded what became our most popular tune ‘Who Will Save Rock and Roll?’ I can’t think of another band that’s accomplished that on a record recorded long after their supposed heyday.

You’ve long had a loyal cult following in Australia; there were a number of bands that took a leaf out of the Dictators book or covered your song (Hitmen, Eastern Dark, Screaming Tribesmen, Psychotic Turnbuckles for example), Stuart Coupe issued the D.F.F.D. CD here, your tour a few years back was successful etc. I also think it’s just that Aussie music fans just like bands that really rock! How does that make you feel?

Australia is home to many great bands that attended the same rock and roll school we did. It’s flattering to think we had an impact on the scene down under. I might add that the door swings both ways as another band I play in, Master Plan covered Walking an Eastern Dark tune on our first album.

What are the Dictators about?? Not sure; as a songwriter, I never wanted to repeat myself and always tried to paint with a broad palette. The Dictators only made four records but each is very distinct from each other. The Dictators Go Girl Crazy! was about teenage anarchy, while Manifest Destiny was our very poorly timed commercial bid, Bloodbrothers was The Dictators as street gang and D.F.F.D. was punk rock for adults.

My favorites include… ‘Who Will Save Rock and Roll?’ because it successfully captures the bands zeitgeist in three minutes. ‘(I Live for) Cars and Girls’ is my tribute to Brian Wilson who inspired me to become a songwriter. I like ‘Pussy and Money’ because it reveals the secret of life. Finally I really love well-crafted pop music and I think the demo version of ‘Sleeping with the TV On’ is the best representation in the Dictators catalogue.

Faster...Louder: The Dictators Best 1975-2001 is an Australia-only release on Raven Records and is reviewed here.