“I was born a singer,” Arnold says. “I was born into a gospel family, so I was always singing in church with my mom and dad, my siblings and my grandma.”

While she’d never entertained the prospect of becoming a professional singer, Arnold was familiar with Ike and Tina Turner and the Ikettes. “Everybody knew who Ike and Tina Turner were,” Arnold says. “Black Americans were familiar with all the black artists who were out there, Tina being very special. She was known as the female James Brown. She was on television doing the Dick Clark show, lots of colour TV programs, Hullaballoo, so I was very aware of who she was.” 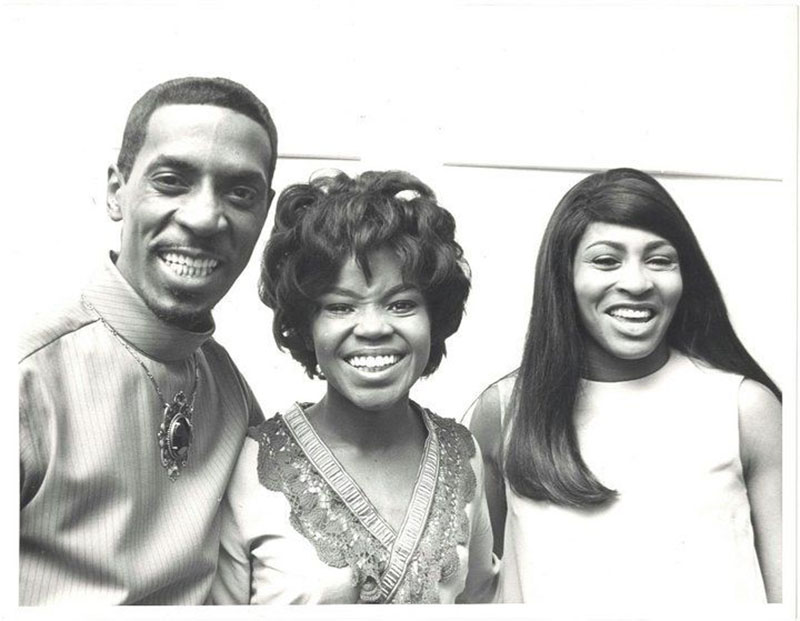 With Ike and Tina Turner.

Arnold completed her first audition was offered a spot in the Ikettes on the spot. Four days later, Arnold was on stage in Columbus, Ohio, singing back-up vocals with them.

“We rehearsed at the house in LA before leaving, then we travelled in the car, we rehearsed all the way in the Cadillac on the way to the show!” Arnold laughs. “We learned the basics of the show, we were young girls, we were the personification of Motown, we knew all the dance moves, all the steps. When you’re young, you catch onto things real fast! But we were definitely thrown in the deep end!”

Arnold’s marriage wasn’t a happy one: her husband, like Ike Turner toward Tina Turner, was violent. Arnold felt Tina Turner had rescued her from an abusive relationship; Arnold was shocked to discover that Tina herself was in the same situation.

When Ike and Tina Turner headed across to the UK in 1966, Arnold went too. Arnold hit London just as the Swingin’ London period came into full mod view. Arnold, naturally shy and demure, came out of her shell when she started hanging out with The Rolling Stones and other protagonists in the UK rock’n’roll scene. Coming from the United States - and Watts in particular, which had suffered devastating race riots in 1965 (which was the inspiration for Buffalo Springfield’s ‘For What It’s Worth’), Arnold was pleasantly surprised to find a greater level of acceptance in the UK. 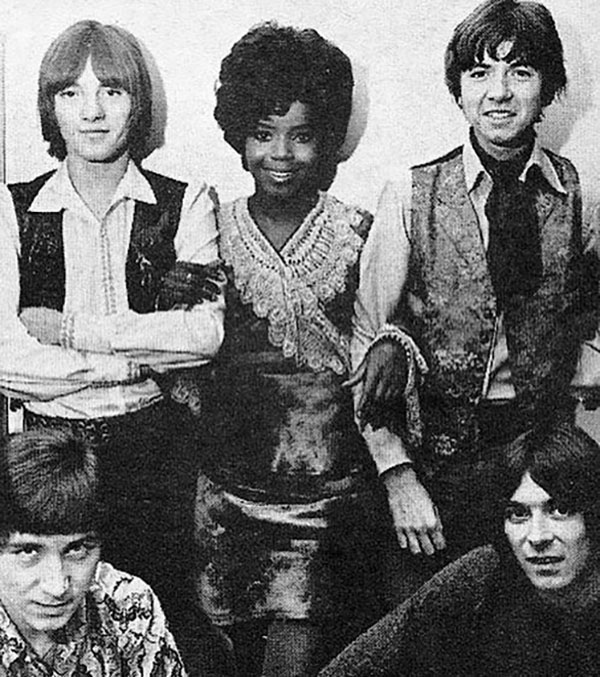 There are but four Small Faces...and a back-up singer.

“Just as a black act in the UK, everybody was really into that music. Everyone was into that music, the Motown, the Stax, the blues, the jazz,” Arnold says. “In Europe, black artists have always been held in very high esteem.

"Personally, I would not have had the career, the opportunity that I had in the UK, I would never have been integrated so quickly into cosmopolitan white society and be hanging out with whites. We were coming out of the civil rights revolution in America and into the music revolution in the UK, and it was a totally different way of being. They really respected the artistry and the music.”

Arnold never planned to be a solo artist. In fact, even when in 1967, Mick Jagger and Andrew Loog Oldham floated the possibility of her staying in London and recording a solo record, Arnold didn’t see it as part of any planned strategy on her part. “I never planned to be a solo artist, I didn’t go to England with any sort of ambition, other than it being a gig as a way of supporting my children, and getting out of that abusive situation which as a young teenager I’d been going through,” Arnold says.

“When Mick and Andrew Loog Oldham suggested I stay and record a solo record, it was out of the blue, that was destiny sent to me,” Arnold says. Arnold had made an off-the-cuff remark to Mick Jagger that she was thinking of leaving the Ikettes when she returned to the United States. Jagger and Oldham suggested she stay in the UK, and proceed as a solo artist. But first there was the issue of informing the notoriously volatile Ike Turner that Arnold wouldn’t be coming back to the States.

Perhaps wisely, Arnold chose not to tell Ike directly of her intention to jump ship. “I did the last gig with the Ike and Tina Turner Review at the Ram Jam Club in Brixton. I had sneaked my bags into the club, and Ian Stewart and Mick and Andrew came and picked me up and they took me to Epsom where I was staying,” Arnold says.

Arnold was ferried out to Ian Stewart and Stones engineer Glyn Johns’ place just outside of London. Ike Turner, meanwhile, had discovered the subterfuge and was livid.

“He called and he threatened me, but there was no way he could find me by the time they had to leave the next morning. It wasn’t the way that I would like to have left, because I’m sure it made things even harder on Tina, but it was the only way I could leave without Ike interfering. I don’t think Tina ever forgave me for leaving like that, even though later on she had to make her exit pretty quick as well.”

Dubbed The First Lady of Soul, Arnold’s first solo album, "The First Lady of Immediate", produced by Oldham and featuring the Steve Marriott and Ronnie Lane-penned track ‘(If You Think You’re) Groovy’ was released in 1968. Arnold also featured on The Small Faces’ classic third album, "There Are But Four Small Faces", most memorably singing backing vocals on "Itchycoo Park" and "Tin Soldier". 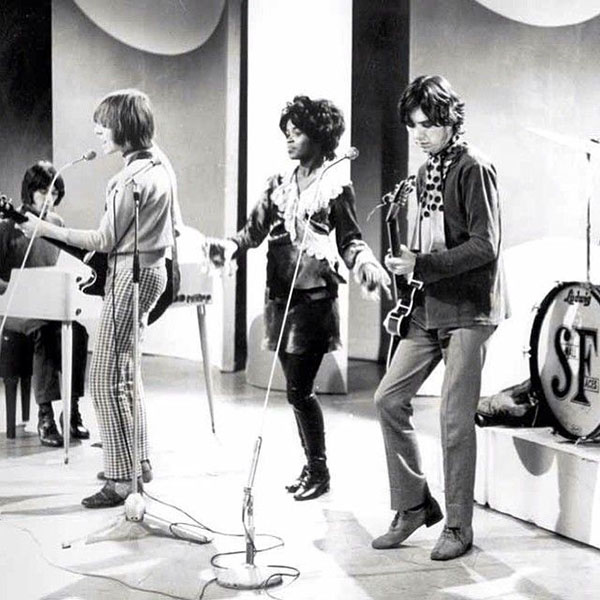 PP Arnold on TV with the Small Faces.

“Steve was a labelmate of mine,” Arnold says. “The Small Faces and PP Arnold were the new kids on the block - we’d both signed to Immediate at the same time. Because so many people were excited about this new independent label, Immediate Records, which was right around the corner from where all the musicians hung out, there was always a lot going on there.

"The whole idea about Immediate was that we were trying to create something like a London Motown situation where all the artists worked together and worked on each others’ creations. We travelled and did gigs together, lots of TV shows, but we were actually separate artists. The work we did together brought us together, but it was Mick Jagger and Andrew Loog Oldham who were more important to me as an artist.”

The 1970s were a difficult period for Arnold. “I went through a long period of being lost as an artist, because I didn’t really know what to do. I was trying to find my way once again.” Arnold says. After releasing a second album, "Kafunta", Arnold had gone into the studio with Barry Gibb to record a third album, only for the recording to become collateral damage from the break-up of the Bee Gees. 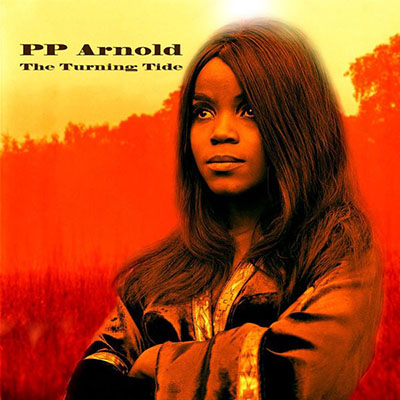 It would take 50 years, and a concerted legal battle with Universal Records, before the album Arnold recorded with Gibb, "The Turning Tide’" would finally see the light of day. “Robert [Stigwood] wanted to see the brothers [Gibb] back together, and he wasn’t really into me as an artist, so the records remained unreleased for many years,” Arnold says.

In the aftermath of the album’s shelving, Arnold maintained a steady career as a session musician, working with Nick Drake, The Nice (who became her backing band), Billy Preston, Eric Clapton, Dr John, Graham Nash, Eric Burdon, Bonnie and Delaney, Humble Pie (which saw Arnold reunited with Steve Marriott) and Rita Coolidge amongst others.

“I was able to keep myself alive as an artist through session work,” Arnold says.

Other dramas also befell Arnold. In 1977 Arnold’s daughter was killed in a car crash. A decade later, a few years after she’d returned to the charts as backing vocalist on the Kane Gang’s cover of The Staple Singers’ "Respect Yourself", Arnold herself was in a near-fatal car accident. Doctors warned Arnold she may never walk, let alone dance on stage, again.

Arnold made another aborted attempt to finish "The Turning Tide" for release, this time in the United States, where Arnold had returned briefly after her daughter’s death. Again, the release was hampered again by Bee Gees politics. Arnold moved back to the UK, where found work through a mixture of session work, live shows and stage production.

While recording Arnold’s soon-to-be-released new album, "The Adventures of PP Arnold", Arnold played the lost 1967 recordings to producer Steve Craddock. Craddock and his wife Sally, aided and abetted by Paul Weller, worked together to polish up the tracks. After an exchange of legal letters with Universal Records to get full legal rights to the tracks, Arnold was pleasantly surprised to find an email in her inbox saying that she now had both the licence and digital rights to the unreleased album.

“Before I got that email, I was going to have a real go at everybody!” Arnold laughs.

Many of Arnold’s contemporaries have sadly passed on. Arnold, now into her 70s, and almost her seventh decade as a recording artist - and she’s showing no sign of stopping.

“It’s just a blessing,” Arnold replies, when I ask her what’s the secret to her longevity. “And faith, will power and determination, accepting God’s will during difficult times. After I lost my daughter, it was a really hard time for me.”

With a combination of her own religious conviction, exercise (“I discovered I was a really good long distance runner!”) and alternative therapy - Arnold became a Reiki master - Arnold overcame the tragedy of her personal life and lull in her career.

“I got into my spiritual development, because I really had to pull my mind, body and spirit together, for my two remaining children and whatever future I would have for myself.”

Next month Arnold returns to Australia for the first time since she toured with Roger Waters in 2007, and the first trip as a solo artist, backed by an all-star band including You Am I’s Tim Rogers, Rusty Hopkinson and Andy Kent, Talei Wolfgramm and James Black on keyboards. “I’m really looking forward to coming back to Australia,” Arnold says. “I had so much fun the last time I was there!” 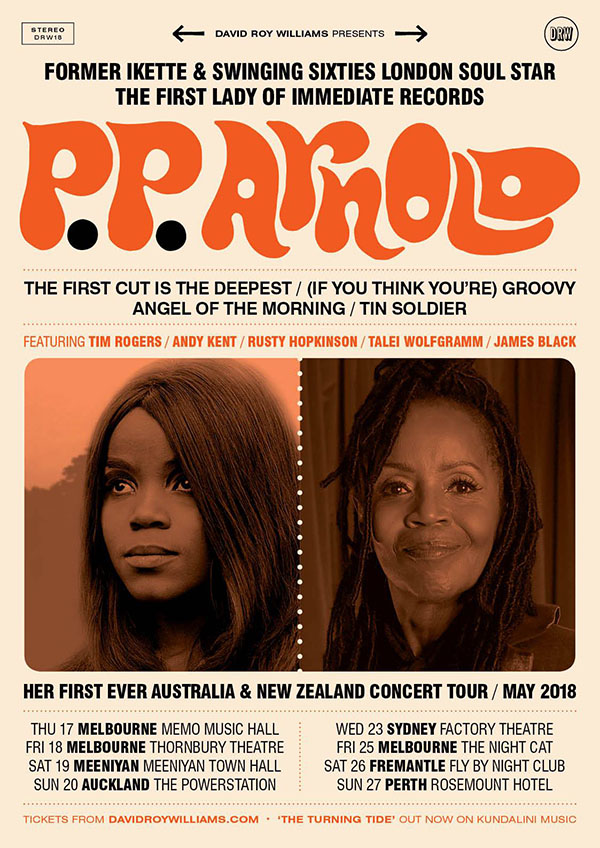