Long term denizens of this scurvy establishment will need no introduction to the names Captain Sensible (nee Ray Burns) and Paul Gray.  If there was such a thing as punk rock royalty (and I’m against it on general principle), these guys would at least be Grand Dukes or Princes or some such. 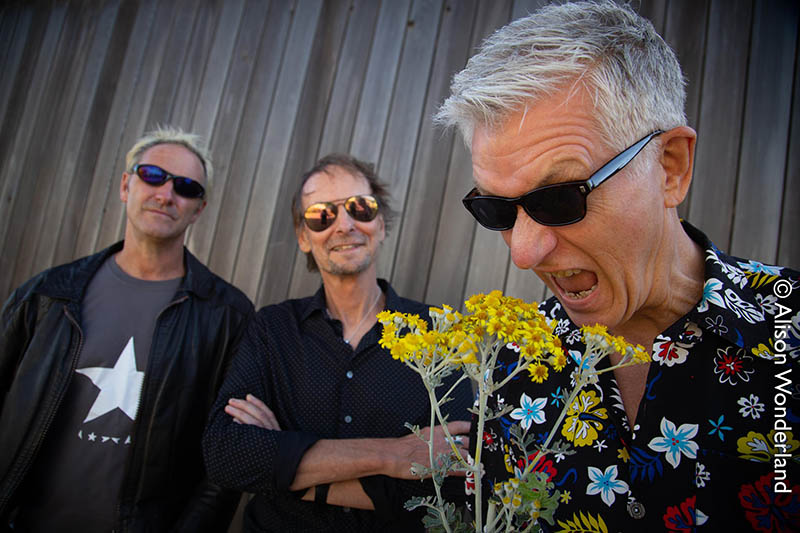 In 2013, Sensible and Gray got together to form the Sensible Gray Cells and released an LP called “A Postcard from Britain”.  During lockdown, they regrouped with drummer Martin Parrot for a new album entitled “Get Back into the World”.

In an interview for “Around the Sound”, the Captain said: “Paul Gray and myself being garage psych aficionados feel there should be more of this kind of music and this is our contribution to the cause.”

Of course, musical terminology varies around the world.  Here in Australia, despite having a garage psych all our own, tend to equate the phrase with more Nuggets based materials.  If you enter expecting the derangement of the Seeds and the Thirteenth Floor Elevators, you might be disappointed.

This is music that tilts more towards a very English tradition.  Think Barrett era Pink Floyd singles ling “Arnold Layne” and “See Emily Play”.  Think late Sixties Kinks and the Who.  Think Status Quo around the time of “Pictures of Matchstick Men” and “Ice in the Sun”.  You might also want to include Blur’s “Parklife” somewhere in there.

And none of that is a bad thing.  But it’s also far from an unexpected career swerve.  Barflies will point out that the Damned actively sought Syd Barrett as producer of their sophomore album only to be gifted with fellow Floyd Nick Mason.  And let us not forget the Damned’s album “Strawberries” effectively sounds like the Sensible Gray Cells with added Dave Vanian or vice versa.

This, however, should not be viewed at criticism.  I am trying to evoke a sense of pedigree.  This is an excellent album released in unfortunate times.  Not only does it have to face the fatigue of an older fan base who gave up listening to new records when years still started with the number 1, it faces a world where promotion has become nearly impossible.

Publicist David Laing arranges a Zoom interview between us.  The back and forward between continents, negotiating a plausible time for an interview that in some way acknowledges the post rock and roll lifestyle takes some doing.  When I explain that I’m already in their tomorrow, minds are appropriately blown perhaps because I’ve just had the sleep they seem to be so looking forward to.

The planned half hour interview crumbles into technological disarray at the 15-minute mark but let me share with you what we got.

“It’s nuts, isn’t it?” the Captain begins on the subject of promotion.  “All we can do is what we do really.  What we’re allowed to do.  I want to get out on the road with the other lot (The Damned) and this lot.  What can we do?

“It also seems to me like there is a concerted effort on behalf of our esteemed governments to attack rock music (and) live music. I hope I’m wrong.  I hope it comes back again.  I think we have to demand live music.”

I had been edging around some questions.  I had described their music as quintessentially English.  Not British.  English.  The Captain’s response was: “We’re English.” 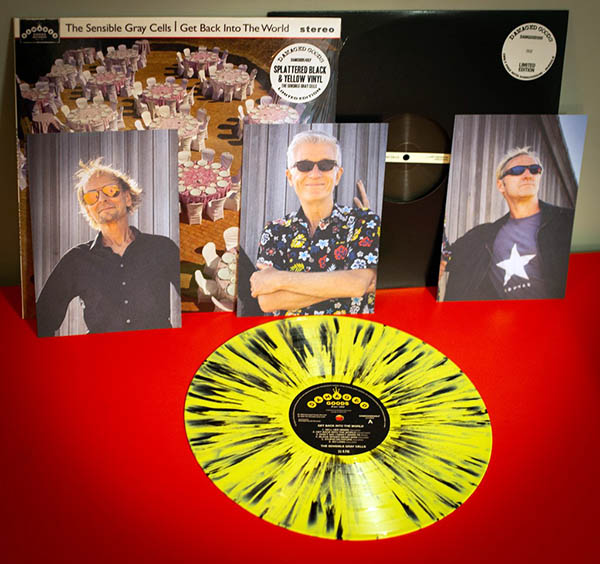 In earlier, simpler times, such a response would be harmless.  Charming.  But we do not live in simple times.  In this post Brexit era, many of our more popular musical heroes have taken a hard turn towards the extreme right.  John Lydon spouts the virtues of Donald Trump and demands the persecution of the homeless in his neighbourhood. Morrissey has gone from animal advocate to the popular face of For Britain.

In many ways, we demand more of our artists and musicians than ever before.  So, obviously, the recreation of the sound of pre-Common Market Britain is going to make you wonder on which side the toast is buttered.  Fortunately, the Captain does not have to be asked on which side his allegiances lie.

He did, after all once record for Crass Records and formed the Blah! Party, an organisation with tangential links to the Official Monster Raving Loony Party.

“Boris Johnson.  Michael Gove (or whatever his name is).  They’ve never been to a sodding gig in their lives.  What do they care?”

“All the highfalutin, high-brow stuff,” Paul throws in.  “They did a showcase for that in London but they can’t do anything for rock music.”

I asked Paul about how Brexit was likely to affect European promotion.

“I spent 15 years working for the Musician’s Union before I came back to the Damned.  I’ve got a bit of an insight for any musician from any genre travelling abroad.  It’s not looking great because its going to have quite a profound effect for visas for touring in Europe, for taking equipment, merchandise.  Paying tax up front.  All of these things that really add up.  And its really hard to make any kind of money from touring these days anyway.”

Times are tough.  What can you do?

So, let’s return to the album.  One of the things that really gives it that English feel is that sense of composition.  In our collective minds, I think we all imagine Ray Davies and Pete Townsend sitting there with sheet music and pen and delivering songs whole to their respective bands. 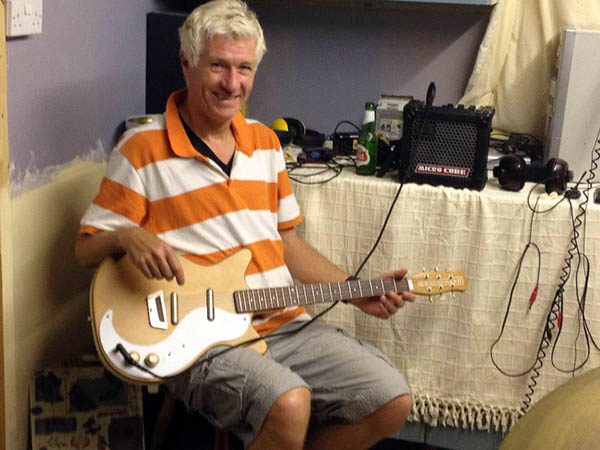 The Captain in the studio. 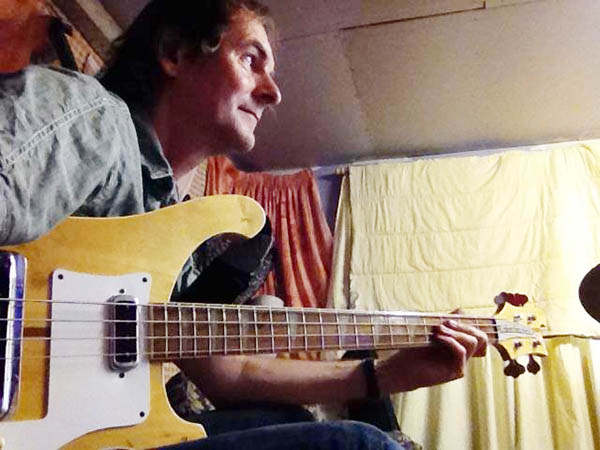 Paul Gray lays down his lines.

You kind of imagine Keith throwing up some lazy arsed blues riff and Mick digging something out of his notepad. British Psych seems more studied.  Apparently not so in this case.

“They weren’t at all,” Paul tells me.  “Caps and I swapped some ideas about beforehand but we only had a couple of days in the studio before the bloody plague came.  Much of it was really finished up at Captain’s place and mine.

“We just put overdubs on, swapped files and roped some people in to mix it.  I think it may sound like it’s organised and arranged just because we know where each other are coming from.  We work really well together.”

“I think our generation is blighted by growing up when the Beatles were on the scene,” said the Captain.  “Because they were just so darn big and so incredibly good at what they did, I find it very hard to get those song structures out of my head when I’m actually sitting there with a guitar to knock a song together.  It’s very hard to break out of the verse, chorus, verse, chorus, middle eight, blah, fade template.

“I think it still sounds really fresh in a way that rock music generally doesn’t.  I think that loud, heavy, stodgy thing has been done.  As much as I like early Black Sabbath and everything, heavy rock turned into something really turgid.  You know, Iron Maiden and that dross.”

The Captain begs off before he starts to rant.  (His words not mine.  My job is to encourage a good rant with juicy malice with little forethought.)  He lets me know it’s a garage psyche album.

“I tell you what’s pleasing,” Paul says.  “We got sent a list of reviews the other day.  Normally you get people who don’t like it.  Every review has been really good.”

“People really seem to like it.  It’s an extremely varied album and the beauty is we’ve got nobody telling us what to do. We’ve got no management saying you’ve got to make it sound like this.  It’s purely done as an outlet for the songs we write.  To hell if people liked it or not but it’s been really pleasing that people have liked this one.”

It’s time for me to get a little cheeky.  The other major player on this album is Martin Parrot and I’ve played and recorded with him so, you have to stick up for mates.

“Why didn’t you call yourselves the Sensible Gray Parrots?”

“I didn’t actually think of that,” the Captain responds.  “That actually works.”

“He’s a drummer with Johnny Moped,” Paul tells me.  Both he and the Captain have had considerable involvement with that institution over the years.

“He (Parrot) was a really affable bloke and a really good drummer.  We got on with him really well.  Drummers can be a bit of a funny breed but he seemed relatively normal.  When we came to think about doing the new album, that’s the first guy Captain mentioned.”

“I really enjoyed those sessions,” says the Captain.  “A lot of punk drummers just motor through the songs regardless of the highs and the lows.  These songs were written but they were never toured.  It’s really nice to play with a drummer who plays the song rather than the drum kit.”

“Get Back into the World” is a great album that deserves your attention.  Get off your arse and check it out.