MONDAY EVENING GUNK - Episode 6 - IT'S JUST THAT I MISS YOU featuring Julie Mostyn Gilbert & Warwick Gilbert from ZENN on Vimeo.

Catch Monday Evening Gunk on the MoshPit Faccebook at 7.30pm every Monday or catch up here every Tuesday. Next up on Gunk: Chris Masuak of Radio Birdman, the Scraming Tribesmen, the Hitmen and the New Christs who will be interviewed by Bob Short (Filth) and Tiffany Palmer (Sydney Rock and Roll Markets) and play a set with his band, The Viveiro Wave Riders.

A DATE WITH A MICK MEDEW - MONDAY EVENING GUNK CATCHUP

Episode 2 of "Monday Evening Gunk" with Australian swamp rock god Kim Salmon (Scientists, Beasts of Bourbon) is now online for your viewing pleasure. Kim joined Sydney co-hosts Jay Katz (Sounds of Seduction, Mu Mesons) and Tiffany Palmer (Sydney Rock and Roll Markets) down the line from Melbourne to talk about the new Kim Salmon and the Surrealists album "Rantings From the Book of Swamp". 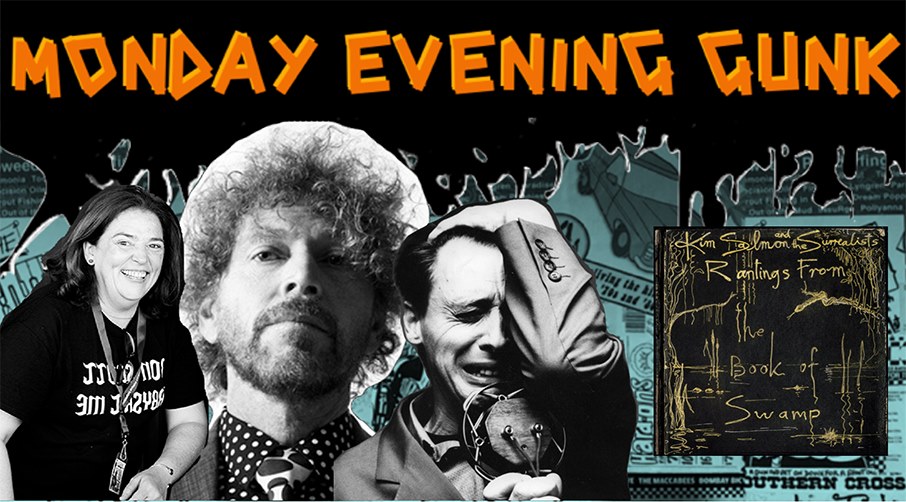 The second episode of the I-94 Bar Internet TV show "Monday Evening Gunk" streams live this Monday at 7.30pm (AEST) from the Moshpit Bar in Sydney with swamp rock legend Kim Salmon the special guest.

This week's co-hosts Jay Katz and Tiffany Palmer will talk to Kim about his new album with the Surrealists, "Rantings From The Book of Swamp", as well as matters to do with the Scientists, the Beasts of Bourbon and his numerous other musical and art projects.

"Monday Evening Gunk" is free and comes to you from Moshpit, Zenn Stream, City of Sydney Council and Coopers beer. You can watch it on the Moshpit Facebook page here and register for a reminder at the associated Facebook event here.