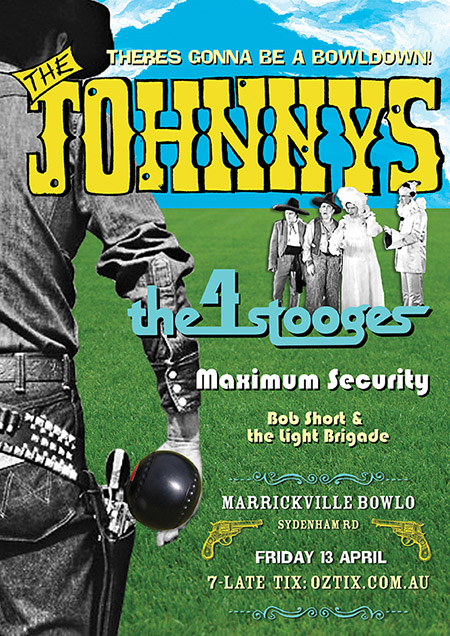 They racked up eight singles and three albums, playing almost every pub and club the length and breadth of Australia and convening an instant party wherever they went.

The Four Stooges are not a Stooges tribute band, but a self-described live Stooges fan club featuring members of the New Christs, X-Ray-Spex, Celibate Rifles, Buffalo Revisited and Filth. Led by Mushroom Planet singer Ripley Hood, the songs are played with all the love, passion and science they deserve.

Maximum Security is led by Guy de Varine-Bohan and includes members of Sydney’s most hated band, The Stukas. A product of Sydney’s punk scene of the early ‘80s, they’re launching their CD, “Never To Be Released”.

Bob Short & The Light Brigade is the latest project for Bob Short, one of Sydney’s original punks who played guitar for Filth, forerunners of Radio Birdman favourites The Psychosurgeons and The Lipstick Killers.

Tickets are selling fast and can be procurred here or on the door on the night (if there are any left.)