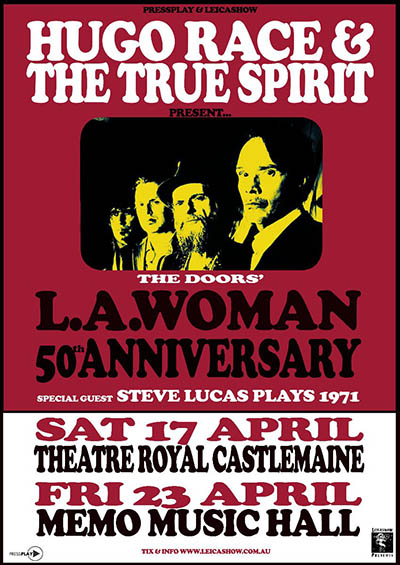 The Doors' final studio album (with Jim Morrison) was a bluesy, self-produced, garage-style recording that contains two of their biggest singles, “Love Her Madly” and the atmospheric "Riders on the Storm". Now considered Classic Rock, it was a conscious return to the garage-rock/bar-band blues roots that had galvanised The Doors’ self-titled debut some five years previous and also hinted at new directions.

Performing “L.A. Woman” in its entirety is a labour of love for Hugo Race and his psychedelic quintet The True Spirit, and these shows follow the recent release of their critically acclaimed “Star Birth, Star Death” double album.

Race was a key player in Melbourne's early ‘80s post-punk scene, leader of seminal Seaview Ballroom outfit The Wreckery, and a founding Bad Seed. He has been a prolific independent producer and recording artist in Europe and Australia for over 30 years.

The morose spirit of “Riders on the Storm” was later infused in artists ranging from Radio Birdman to Joy Division to Nick Cave; it and the incredible title track, with its unrelenting cruise-control beat, anticipated the motorik rhythms of Stunde Null-inspired groups like Can and Neu! The dry, spare sound of the record would also prefigure a lot of post-punk sounds.