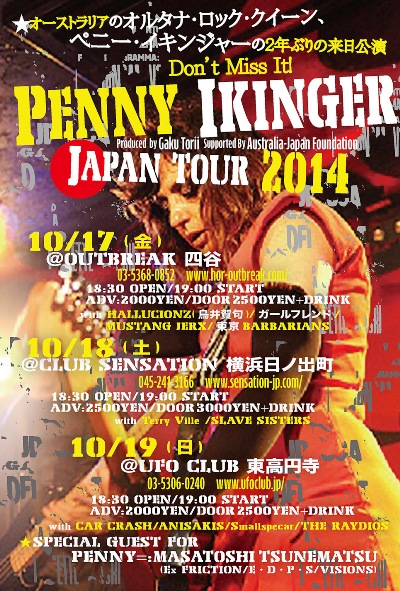 Penny also continues her partnership with the Australia-Japan Foundation, which is sponsoring this project. They also sponsored her previous tour to Japan in 2012.

“The Australia-Japan Foundation has been wonderful in their support and I think this next album will take our unique Australian-Japanese music relationship, in a completely new direction.” Penny said.

“This project is both exciting and challenging. I’ve always tried to extend myself and explore new styles and songwriting approaches so, for me, the evolution of a new sound is really something special! ”

Penny has been performing music since the halcyon days of the Oz music scene in the mid-1980s. She has recorded and toured with an eclectic mix of artists across Australia, Europe, America and Japan.  Penny Ikinger’s new album is intended for release in 2015. Watch this space! JAPAN 2014 TOUR