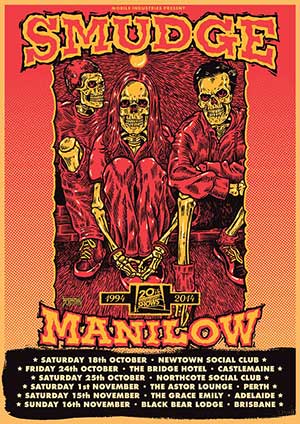 After a slew of shorter releases on seminal indie label Half A Cow, "Manilow" kick-started a busy 12 months for Smudge with Australian tours being squeezed in between US and European trips including a slot on Reading Festival, a John Peel Session and runs with The Lemonheads, Superchunk and Sebadoh to name a few.

Fast forward to 2014. Smudge has been working feverishly; retweaking bits and pieces for the 20th anniversary release of "Manilow". Having seen reissues in both Europe (Fire) and Australia (Half A Cow), the trio has launched its own label (Smudge) to unleash a remastered, 180-gram virgin-vinyl longplayer. .

To coincide with the release, Smudge is pleased to announce a national Australian tour with lots of special guests and happenings to accompany. Stay tuned. The limited vinyl repress of Manilow is available for pre-order from here.