The funding decision that reveals a CASM between someone's ears 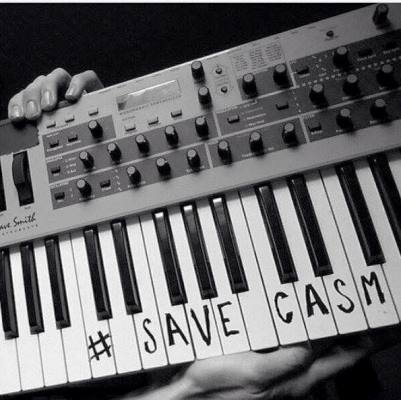 As you may or may not know, I dislike, and am deeply suspicious of, political causes. Usually they’re poorly thought-out (with unforeseen consequences which should have been foreseen, if you know what I mean) or are laden with the usual ‘elect me’ agenda.

It started publicly with Facebook, as many things do these days, as we’ve lost our newspapers. A chap called Nathan May posted at 8.25pm on 11 May:

“So tonight I was supposed to receive an award from the University of Adelaide for my contribution within the Music Faculty but I rejected it. The reason why I rejected it is because the course I did for the last three years in risk of getting cut. If it wasn’t for CASM I would not be in the place I am today, CASM is family.”

This is how the University of Adelaide describes CASM:

“The Centre for Aboriginal Studies in Music (CASM) is a specialist Australian Indigenous music centre located within the Elder Conservatorium of Music at the University of Adelaide. CASM provides specialised tertiary level university based music programs for Aboriginal and Torres Strait Islander musicians, and is a key centre for Australian Indigenous music production.”

It goes on: “Studying at CASM provides key knowledge and skills required to pursue opportunities in further education and employment in a range of fields …” such as performance, education, community development, sound recording and engineering, music industry production  and management, dance, and composition and arranging.

They’re pretty pleased with CASM over at Adelaide Uni, too;

“CASM has achieved a national and international profile through its innovative Educational Programs and extensive performance, research and community engagement activities. Since its inception, CASM has been an innovator in curriculum development, responding directly to the identified learning needs and aspirations of Aboriginal & Torres Strait Islander music students.”

CASM has been described as "the first important catalyst in Aboriginal music's renaissance" and is recognised for its leading role in supporting Indigenous cultural maintenance and production through music and dance.

Past CASM students have enjoyed career success in composing, performing and recording, and have won international recognition and awards for their music.  Past CASM students have also gained employment and are engaged in a wide range of professional and leadership roles including in education, health, government, community development, media and the broader arts sector.”

So, are they shutting this “important catalyst in Aboriginal music’s Renaissance” down..? Seems a bit … not quite sensible, really.

On May 16, Leighton McDonald-Stuart wrote in the Adelaide University Union blog (‘On Dit');

“Students of the Elder Conservatorium have been in uproar this week over plans to drastically alter its academic structure’; and quotes from a memo dated 6 May sent by Professor Jennie Shaw, the Executive Dean of the Faculty of Arts, to Conservatiorium staff.

“The main proposals were to ‘abolish Classical Voice Performance as an independent program, instead merging studies into Conducting and Ensemble Studies’ (which even I think sounds absurd); ‘requiring teaching staff to instruct outside their specialty areas’, and ‘Axing all Centre for Aboriginal Studies in Music courses’.”

Then, the Director and the CASM students had a meeting on Tuesday last week, passing a motions of no confidence in the Head of Music and the Executive Dean. Professor Shaw has not responded to On Dit’s requests for an interview. The following day students held a protest in Adelaide city, while at 2pm, CASM staff were given a budget report (which is the current excuse - buggered if I know if the Uni have explored other funding options, but I guess the shiny bums will squawk “not my job”.)

CASM only has five positions, and the restructure means all will be reduced, and, presumably, wound down as the implication is that the courses Diploma in Aboriginal Studies in Music, Advanced Diploma in Aboriginal Studies in Music, and the CASM Foundation Year Program, will not be offered in 2016. This comes together with ‘the expectation that Aboriginal students will be expected to enrol in existing degree programs’, and shifting CASM into a faculty Centre of Aboriginal Language and Music Studies …

See, the Elder Conservatorium teaches Classical and Jazz and a bit of (what they think is) R’n’R. It is, of course, open to everyone who can get the current Gov’t study loan. But you know, academia doesn’t matter much to some people; what does matter is learning how to best develop their musical talent.

CASM has been going, I am told, since 1975, when it started up in a place well known in this state for being poor and somewhat desperate (I think I was under ten when I first heard the term ‘the Port resurgence’ (that’s the late 196ts), and nothing much seems to have happened since), and it’s given hope and knowledge and self-confidence to a rather large number of people who might otherwise have had none of the above. CASM was taken under the wing of Adelaide University I think about four years ago.

Given that CASM caters to Aboriginal people, and the dreadful problems they often have dealing with the rest of us (not to mention the cops, I said, don’t mention the cops), CASM is clearly a small but rather necessary component encouraging integration. Isn’t this week ‘Integration Week’..? Kind of like cutting down all the trees and naming the streets ‘Elm Street’ or ‘Walnut Crescent’.

By this time, if you haven’t figured it out, you’re either astonished or bored by more bean counters giving the poor a bit of a kick in the chops. Rather reminds me of those cheery ‘job service providers’ currently milking the Feds with pointless programs for people they ‘know’ will 'never' find work, when a good chunk of the time all they need is a bit of hope and consideration. But you can't legislate for those things, can you?

I think what annoys me the most is that we're always bombarded with stories of young people, sometimes Aboriginal, who 'don't fit in', and there's precious few resources available. When one, rather significant, group has its resources pulled, what hope do the rest of us misfits have..? Music, like sport in some countries, acts as a community binder, the grease on the cogs...without it...we're just drones. And those of us who don't want to be the drones, if we don't like it, we get aggressive or act up. Or die young.

CASM might not at first seem like a hugely significant issue, but in a city like Adelaide which keeps banging on about how 'vibrant' it is (to the point of plunking huge stickers on the pavement telling us we're in a vibrant spot) but refuses to assist more cash-strapped artists ... nah.

This decision was taken on the fly, without proper consideration. If it were thought that CASM had faults, they should've been addressed first. Adelaide is such a small parochial wart of a town at heart, despite all the bluster about friendly festivals.

Here’s one of the petitions. 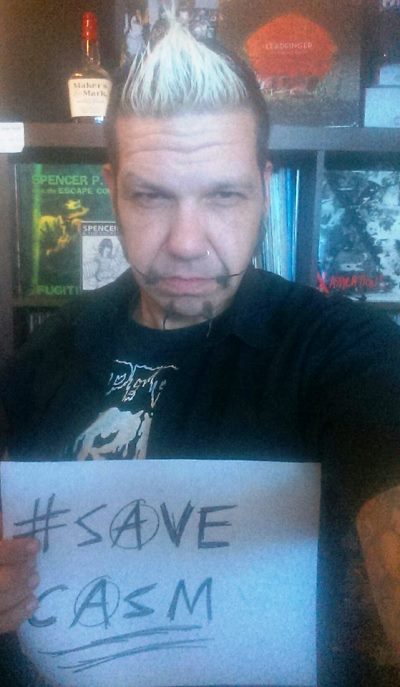 We’ve also been asked to send lucky Adelaide punk rocker Pete 'The Stud' Howlett (on Facebook) from the ProTools pictures of ourselves clutching a sign saying # SAVE CASM. That's him pictured above. It seems a small thing to ask. 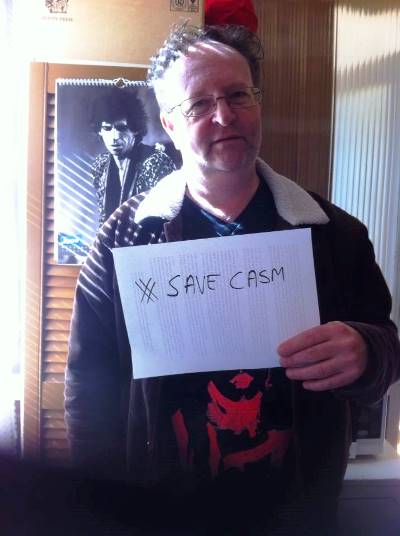 I mean, I’ve done it. And, if you take a look at the Save CASM Facebook page, rather a lot of hoary rockers are doing it too.

I mean, let’s tell the shiny bums their shit may be shiny, but it still stinks.