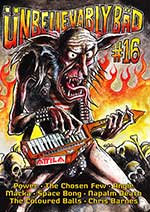 The other gem in the crown is a long interview with Mad Macka, of The Onyas, The Egos and more lately the Cosmic Psychos. Macka is one of Oz music’s more interesting if unassuming characters with a law degree and a string of other interests outside of punk rock.

The folks at UB know that presentation is an important part of the zine package and they have some of the best illustrators around in Glenno and Rick Chesshire.

Remiss of me not to review Issue 15 earlier in the year but that oversight’s easily fixed. It’s down to personal taste but this one was a touch underwhelming for me with the choice of interview subjects mostly neither here nor there.

The exception was the chat with HITS, all of whom managed to take part. It alone is worth the price of admission. A shout-out too for the interaction with the intense and hyper self-critical Shogun, frontman for Royal Headache. You think YOU have issues? There would be plenty of you who’d be up to read the interview with Buzz from The Melvins too, so don’t hesitate in tracking down your copy.

UB always tries to push the boundaries so do me a favour. Don’t Google Kenneth Pynyan until you’ve bought Issue 15, OK? He was just horsing around. Here’s a list of stockists or order it online here.