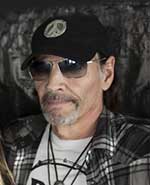 Scott was a great artist, I have never heard anyone play the drums with more meaning than Scott Asheton. He was like my brother. He and Ron have left a huge legacy to the world. The Asheton's have always been and continue to be a second family to me.

My thoughts are with his sister Kathy, his wife Liz and his daughter Leanna, who was the light of his life.

Thank you so much for your kind words and thoughts around the passing of our friend and bandmate Scott Asheton last night. My only comfort is that he reached out to me in an email about a week or two ago saying that he was thinking of me and the good times we had together and that he would like to make some music with me. I responded but he never got back to me again. I guess that was his way of saying goodbye for now….

Anyway, my heart goes out to his immediate family Liz, Leanna Raquel Asheton and Kathleen Asheton. He was one of the good guys and a friend of mine.

Asheton and late guitarist-brother Ron were founding members of the band and integral to its sound. Scott had stood down from touring in the wake of a health crisis while on the road but played on the most recent Iggy & The Stooges album, the acclaimed “Ready To Die”.

Asheton – aka “Rock Action” – was the drummer for legendary Sonic’s Rendezvous Band and a host of other important bands and artists. His c.v. included stints with Dark Carnival, Destroy All Monsters, Scott Morgan, Scots Pirates and Deniz Tek.