Written by Robert Brokenmouth on 21 February 2018. 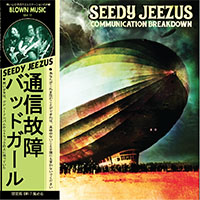 A cardboard cut-out of a custom '70s-style Kombi. And an info sheet, which tells me that 'Bad Girl' (a Seedy original) was recorded live at The Tote for the first LP but didn't make it, and a new version of a Led Zep number.

Now, do allow me a slight divergence.

The 7", 10" and 12" vinyl disc has always had the potential to be great art. Rarely (and I meant that) does this ever happen. Okay, part of that is down to what's on the disc itself, part down to the cover. The Beatles understood this, and so did the Stones, once upon a time, and although there were some beautiful EPs and singles released in the 60s, for me the 1970s and early 1980s saw the expansion of the format into some sort of wonderland. Hell, even Little Nell produced two gorgeously shiny singles, coloured vinyl and all.

Hell, you can even be cremated and have your ashes pressed into vinyl. Easily the coolest way to die.

Right. Not a huge fan of Led Zep, I'm afraid. Don't knock the ability, nor the influence (god, it's huge) but... since it's the Seedies...

Have you seen these fellas? They know how to rip a song to bloody ribbons, improvise, work with each other ... and the emotion and excitement they generate is like nothing else around.  Seedy Jeezus rock in the old-fashioned sense; they're hairy, sweaty, rock like beasts and you'll stain your trousers.

Get yourself onto their site, get your wallet out and get their records - there's still a few copies left and they're all killer.