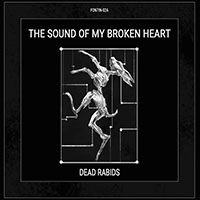 Dead Rabids main man Bob Short was a member of seminal Sydney punks Filth before he fucked off to England to become a goth and live in abject poverty. He’s also penned the odd vituperative review for the I-94 Bar. So now it’s your turn. Do your best.

There’s no hint of hyperbole in you being told that the A side is a fantastic song. A stone classic. Dead Rabids are no more and never pulled a lot of people when they were a going concern, but don't let that stop you plonking down your hard-earned virtual cash and picking up a copy before it goes out of print.

The pathos runs deep on "The Sound of My Broken Heart" and it sounds like something the early Saints would have turned out in one of their more reflective moments. Put away any sharp objects and lock the medicine cabinet.

Flip the single and switch the mood to bathos: "Do the Harold Holt" is an old Filth song (I think) and you can imagine singer Peter Tillman spitting out its message for poliical leaders to jump into the sea three times and surface twice. A resuscitated classic. The Rabids' abbreviated take on "White Rabbit" sounds positively doom-laden and there's a harsh beauty in its acrid chords. Feed your head some squat food.