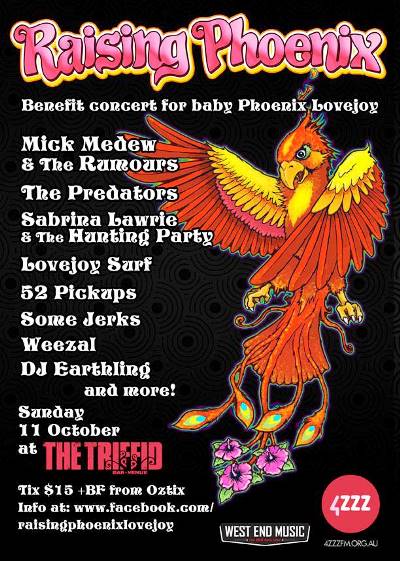 Bass player, gig facilitator and festival roustabout, Kylie Lovejoy, is considered rock royalty in her hometown of Brisbane, Australia. She recently made headlines around the world with the unexpected and dramatic arrival of her son Phoenix, who arrived three months premature while Lovejoy was holidaying in Hawaii with her partner Brendan Wright and brother, renowned record producer, Jeff Lovejoy.

Idyllic location aside, the delicate nature of such a premature birth has placed Kylie in a position of financial hardship with Phoenix needing round-the-clock care in the Neo-Natal Intensive Care Unit (NICU) in Honolulu until he has reached full term age.

Kylie will be residing in Hawaii for at least three months, until Phoenix is strong enough to fly home to Australia. Whilst some of the extensive medical expenses look likely to end up being covered by the US version of Medicare, the family must still meet the costs of Kylie's living expenses whilst she is staying in Hawaii. She currently has no income and is wading through a mountain of insurance company red-tape.

A group of Kylie and Brendan's friends and supporters have banded together to help raise funds for little Phoenix and his family in a loving attempt to meet these expenses.

A crowd-funding page (http://www.youcaring.com/kylie-lovejoy-and-family-382944) has been set up for immediate donations, and a benefit concert has been organized at The Triffid in Brisbane's Newstead for Sunday October 11, from midday.