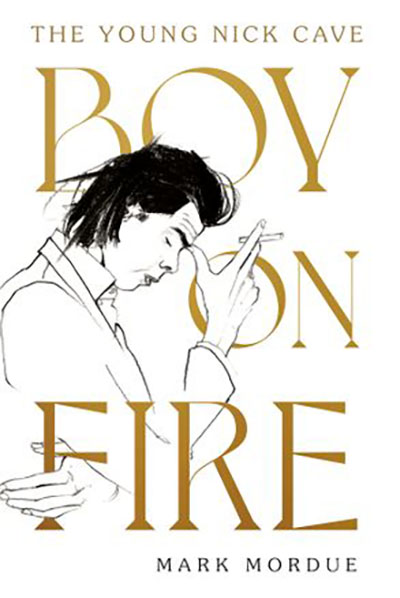 Lou Reed famously used the phrase "Growing Up in Public", but it's seriously arguable that he ever grew up at all. As represented in "Boy on Fire", Nick Cave grew up in public, and it's that Odyssean journey which we want to follow. 'Cause success, well, that's over-rated. It's nice that you're not poor anymore, but boy, if you had problems before, you could easily have a worse time dealing with them.

So author Mark Mordue begins with some of what he already knew, and of what we already know, before plunging down a rabbit-hole beset on all sides with imminent spiteful criticism, fact-checkers, poor-memory merchants and "it wasn't that way at all" keyboard numptys.

That he suspects what he's in for is quite clear from his early observation of the bond between Nick and his mum before Cave heads off to accept an ARIA Award in 2007. To his credit, although he was only nominated himself, Cave also inducted the other members of The Birthday Party and The Bad Seeds on the night. (Most annoyingly, he forgot to mention the band's original drummer, Phill Calvert).

Like I said, brave or damned foolish; it's hard to be a writer, not a hack, and make any money (Mordue has a day job, he's no fool). "Boy on Fire" deserves to be purchased for yourself, your friends and anyone you know interested in music. Period.

One reason is that, if you know enough about Cave, you'll also know that any decent book about him should always have a modicum of humour. I found myself chuckling out loud on the bus within minutes of beginning and, while it's not written with laughter in mind, you will find the several threads which Mark sets up quite early, vividly rewarding. Cave himself, an adventurous mischief-maker, possesses a savage and spontaneous wit, and his company can be addictive. Small wonder that so many who have encountered him either don't comprehend him, or find him boorish, or jaw-droppingly fascinating.