Love Hypnotic - The Jim Mitchells (Off The Hip) 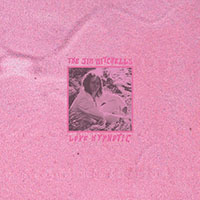 Don’t judge a book by the cover, they said. They were right. The contents of ”Love Hypnotic” leave its quirky artwork for dead.

Descriptor? Somebody said “acid washed garage goodness” and that’ll do. Respect. That one can’t be topped. There’s an almost effortless drift to this Sydney band’s sound that makes it click. Wafting melodies and dreamy vocals jostle with rustic guitars to create an alluring soundscape.

I know. You’re dying to know if there is an actual Jim Mitchell and the answer’s Yes. There’s the man - on vocals and guitar - who's evidently the creative multi-instrumentalist, and his band. And they are a band. They even play live and tour - a lot by contemporary standards.