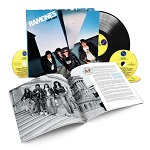 Alright, so it seems a little much to have to buy a set when you already have the fuckin' songs, just for one track: "Asthma Attack". Actually, the song seems to be in two halves, which is why this groovy racket is on a 7" single tucked into the front. Never was a 7" of a well-known band (these days) less likely to be a single. You know?