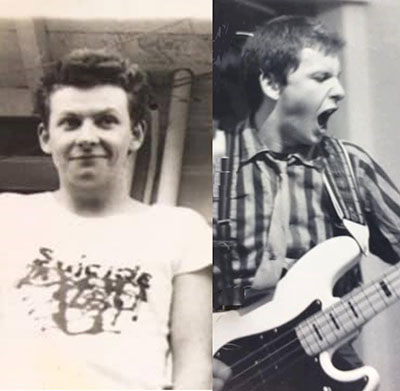 3. Hollywood was groovy though, groovily scary. I went to a record store and fingered vinyl, being the festive season I found a 45 of the Dickies version of “Silent Night” I took it to the counter and asked if I could hear it, the young chap behind the counter obliged and put it on the platter, it blasted out through every speaker in the store and I laughed. An irate elderly gent, obviously the store manager, pushed the young chap to one side and pulled the record off the turntable and threw it at me in disgust. I caught it, we looked at each other and I said “It’s great I’ll take it!!” The young guy smirked and handed me the cover.

4. We found the Masque Club in Hollywood, it was closed but bands were rehearsing in the rabbit warren of rooms in the club all covered in graffiti. What a shithole. The guy running the rehearsal space invited us in and we went and got some beers (Coors), I swapped my homemade "Sid is innocent" T-shirt for his filthy "Destroy" T. The Go Go’s were rehearsing and a chubby Belinda Carlisle gave me a badge and a peck on the cheek.

5. We caught the Greyhound and crossed the continent – and when we stopped in San Antonio. The bus depot was across the road from the Alamo. I had a bit of time to kill so went for a look, I walked in the exit so I didn’t have to pay, I was looking around and a young tour guide enthusiastically came up to me to enquire if I was punk rock? er well I’m a punk rocker if that’s what you mean? She said she loved Iggy Pop?? So I didn’t get a peck on the cheek but she led me to a glass case that contained the coonskin cap that John Wayne had worn in the movie, "The Alamo". It was kept under a large painting of him swinging his rifle on top of a pile of bodies, I was suitably impressed.

6. We made it to New York, it was freezing, we tried to find the Chelsea Hotel but failed so settled on some other shithole in Manhattan and I experienced, for the first time ,the horror of cockroaches, going to the toilet armed with a sand shoe and screaming like a girl when the light went on, doing a merry dance swatting the 50 bazillion fuckers off the walls. We found Max’s Kansas City, The Cramps were playing, supporting Sleepy La Beef. There were two shows, one at 8pm and one at midnight, and we were early so decided to go to the 8 o’clock show. It was SO good we decided to go to the 12 as well, surprisingly our stamps got us in and we didn’t have to pay twice. A girl came up to me and pointed to my Go Go’s badge, and drawled “if you wanna make it here you godda take thad orf” I left it on so no cheeks were pecked.

7. Next day we saw some sights, ate Dunk’n Donuts and went and saw John Cale that night at CBGB. Yep, it was a shithole. The Bowery was scary...classic stuff with bums standing around, burning oil drums and yelling stuff at us. We felt threatened and caught a cab back to Max’s and went to the 12pm show to see The Misfits.

8. It was Christmas Day and we went to an all-you-can-eat restaurant recommended by the Village Voice. Sitting in front of a huge plate of food I couldn’t help but notice my two travelling companions were the only females in the joint?? I pointed this out and my friend said yes I think it’s a gay bar. My naivety was showing, in a hushed voice I said – “What’s a gay bar? -- OH OK? I see, I avoided peckers and cheeks.

9. I bought my first brand new leather jacket from a disposal store, a classic Ramones one, I bought the Cramps' "Human Fly" single on the Vengeance label with the glow in the dark title on the cover. The Bottom Line had the second Stiff tour on featuring Lene Lovich, Micky Jupp, Jona Lewie, Rachel Sweet and the person we really came to see: Wreckless Eric.  Eric was off chops and, being heckled by the guy next to me, leapt off the stage to punch him in the head. He made a hash of it and landed on his arse, I saw Eric  last year and asked him if he remembered it, he thought for a minute and said: “Yeeeeeah, there was a lot of speed involved”.

10. And we bad a fond farewell to the good ‘ol US of A, we queued for the new cheap arse airline – Laker. It was like lining up in a supermarket, purchasing your ticket at a cash register. We were tired and all New Yorked out, luckily not many wanted to fly that day, we got three seats to ourselves each, so stretched out and slept well heading to the second leg of the pilgrimage NYE in London.