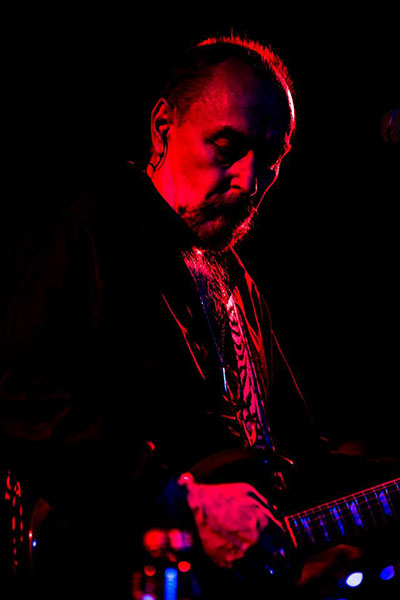 2017...the year that was ...and yes I have Sinatra's ''It Was a Very Good Year'' going through my head. Actually, it had its ups and downs but I'll focus only on the  ultra good, in no particular chronology.

Each of these shows works differently; the audience picks the songs from my recorded repertoire - there is no setlist - and I decide how I'm going to play them, pointing out that these particular live versions won't sound like the recorded versions. This kind of approach could fall flat on its face but the shows got better and better as the tour went along. Hopefully I'll do some more sometime down the track.

Two comments overheard/read or passed on this year captured my heart....

''Kuepper seems so deliriously happy these days he wouldn't know his arse from his elbow'' - a man commenting on my lack of artistic judgement, spotted somewhere online.

''I'm not listening to some cunt massacre my songs'' - a woman storming out of an Aints show and overheard at the merch table at Tweed Heads.

These are the sorts of thing I pay my publicist to come up with, and here people are just giving it up for free.

An absolutely fantastic bit of news: I’m going to became a granddad in 2018!  This puts much into perspective and oddly enough doesn't make me feel old....looking forward this this

In December, I did a show at what used to be the old Baroona Hall in Petrie Terrace. This is just around the corner from what was/is Brisbane's most famous and beloved nightclub from the olden days of 1976 : Club 76 aka The 76 Club.  This show was supposed to have happened in 2016 but as some of you will know.... we do things at our own pace in the sub tropics .

The show was billed as Ed Kuepper and His Garage Band (featuring Peter Oxley and Paul Larsen) augmented by the Nonsemble String Quartet. Capturing the swampy sounds of Oxley Creek.

We played a whole bunch of songs by some band I used to have something to do with back in the day and it was fucking great - once again I had the pleasure of having Rob Davidson do the string arrangements - and as I said on the night, I wonder what would have happened if I'd gone Norman Whitfield strings instead of Stax horns back in late 1977.  This project has legs, dear friends. Don't be surprised if we come knocking at your back door.

A great big thanks for this to John Willsteed who [not only has been a rock in times of adversity] but made this whole thing happen, including the heritage/cultural icons walk thing. BTW, Johnboy: Don't forget the Tony Worsley plaque at Riverview Terrace, Indooroopilly. This is important.

2017 saw the first Ed Kuepper Park in Oxley (the first anywhere in the world, actually) become a reality. My Mum is chuffed. Thank you, Moz

Earlier in the year the idea of reforming my late 80's band, The one! The only! The sensational! The Aints! was proposed to me by all-round ace chap and top bloke Tim Pittman of Feel Presents.  So I said...Pitt (or Molly as those of us in the show business like to call him): Are you out of your mind?  No one remembers that stuff.

It would not have happened without him so thanks to Tim Pittman for putting his money where his mouth is. Also Pete, Paul Al and Eamon (plus the other horn players we picked up from town to town) for throwing themselves into this project. Also, Derek Bovill and the rest of the crew for their indefatigable commitment to getting the show on the road.

It was absolutely great to play this stuff again with my new favourite band but what made it extra special was to include a whole lot of material that I'd written but never recorded, for one reason or another, by the original Saints at the time.

Once I got started on this quest I spent a lot of time going through through boxes of old cassettes and old notebooks when I wasn't touring, hence I don't think I listened to any music this year that wasn't somehow related to The Aints project.

Anyway, stay tuned on this because the hypothetical fourth original Saints album, also known as The Aints ''Church of Simultaneous Existence’’, could well be winging its way to you in 2018. We played a few of these songs on the tour and they went over really well. “S.O.S '75”. “Demo Girl Part 2”, “Red Aces”. And there are more of these never heard leftover rejects. We're going to include some more of them in the set at the encore shows in March 2018 before hopefully recording them in April.