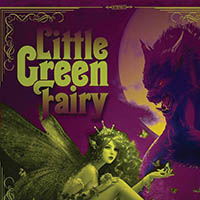 Generous swathes of fuzz and dashes of synth run through “A Thousand Endless Nights” and it sounds great from the bottom end, up. One look at the credits tell you why - expatriate Detroiter Jim Diamond produced, and he brings the focus that makes it a consistently great album.

There are nine tracks and “Too Far Gone” is the pick: Clarisse Bruyere’s ominous bass-line and a surging drum feel signal Rauky Molliner’s vocal in. Layers of guitar and keys slide in and out of the swelling mix. It’s a killer song.

Rauky shows great vocal range on “Pyschosis Connexion” and his singing is a highlight throughout, as is lead guitarist Marco Cailaud’s precise and economical playing. The songs are strong, too.

French psychobilly legend and occasional Fleshtones collaborator Tony Truant guests on guitar on “Trying To Get Back To You”, a radio-friendly cover whose original version alludes me. It sounds pretty good in LGF’s hands.

“A Thousand Endless Nights” is out on LP only on Closer Records in April. You’ll find their website here. At a guess, digital downloads will make their way to the LGF Bandcamp.