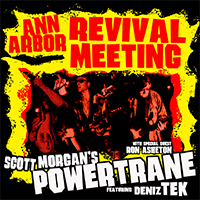 Powetrane's "home" was the Blind Pig, a modest brickwork shoebox on South 1st Street, just around the corner from the Washington Street rail bridge when Scott Asheton wrote off the Stooges' equipment truck.

Morgan was a school buddy of Iggy and the Ashetons and still lives in A2. His band was guitarist Robert Gillespie, an ex-Rob Tyner and Mitch Ryder sideman, bassist Chris "Box" Taylor and tearaway drummer Andy Frost.

Visiting A2 homeboy Deniz Tek was invited to play and another resident, Ronald Frank Asheton, was coaxed on board. Ex-Stooges roadie and singer with the Cult Heroes, Hiawatha, added backing vocals. It was recorded in November 2001.

You probably don't need a track-by-track dissertation to know you need this. It's loud and blisteringly alive. The front-end of the show bounces between Powertrane/Hydromatics/SRB and Radio Birdman/Tek material before Asheton leads the band through a run of Stooges classics. "1969", "I Wanna Be Your Dog", "Down On The Street", "No Fun" and "TV Eye".

There's a Gillespie song, "Taboo", that used to grace Rob Tyner Band sets and you get three extras that never made it to disc the first time: a cataclysmic "City Slang", "Smith & Wesson Blues" and a ragged but righteous "New Race".

Highlights? Many. "What Gives" is especially brutal and the Stooges bracket is fairly sublime with Ron's guitar burning through.

High-octane. It will burn into your Real O-Mind.

Grown Up Wrong on the web