Any Port in a Storm - Shark Arm (self released)

Written by Robert Brokenmouth on 13 October 2019. 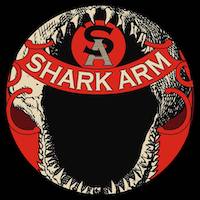 First heard this outfit on Big Daddy K's Sydney community radio show (2RR, 6pm AEDT Saturday nights). They'd released a single ("Dog's Breakfast" b/w "Stitched", and I was smitten. So I got in touch. Turns out the band have released an LP, but as so many do, it's virtual at present.

You'll excuse me. Many, many bands show their influences. Sometimes these are subtle or complex. When I first listened to "Any Port..." I thought they were familiar with Chris Walsh's bass in The Moodists ... but no, apparently not. They've taken the bits of bands which have most impressed them, and created ... some sort of powerful monster.

Shark Arm are anything but subtle. They've taken aspects of The Birthday Party - but not the bits the Jesus and Mary Chain took - the violence at gigs, the shriek-y feedback, the singer leaning on the the guitarist onstage, and - of course - the big hair. None of that. Instead, we're looking at a two-piece (drums, and guitar/ vox) who use ugly bass loops, sing clearly about ugly truths, and whose guitarist has learned about space as well as position.

Also, unlike Cave's hysterical, bellowing vocals (which could be simply unearthly and quite unmanning in the flesh), Shark Arm's Nathan tells you each story, or song, as it is. Some sort of coalition between the Birthday Party and Tom Waits, with Bob Hawke and Roger Rogerson thrown in for bad measure.

In many senses, Shark Arm are a band you will find familiar, musically but very different; and familiar, lyrically, and probably you'll recognise either yourself or people you know there... they're unique, different but recognisable - and bloody powerful.

Yes, you read that last one right. Unlike many bands, the lyrics are as important as the music for Shark Arm. And the music, that maleficent strolling bass, the demon guitar or vocals emerging from parted curtains ... it's perfect travelling music, too. Get on the highway with this and you'll emerge from your vehicle only to get a quart of Southern Comfort and a handful of jerky.

I've said all I'm going to say for now; I'll provide a few lyrics and a couple of quotes from Nathan, and that should be well and truly enough. If you haven't got excited by now, there's something wrong with your 'brilliant new music welcome here' button.

The first verse of "Been Drinkin'" is: "Daddy, why are you so stupid when you're drunk? You cut off your fingers you've been drinking and you cannot play guitar with your thumbs."

I94bar: Er. I think I'm going to regret asking this, but what's this one about, Nathan?

Shark Arm: My father. For a smart man he did some incredibly stupid things as dementia came on. Putting his hand in a mulcher. A hot frying pan to his face to see if it was hot ... All the while 'pissed as a parrot', as he would say. There aren't that many lyrics in 'Merry Dancer'. They include; 'I'm a victim of my self abuse ... The changes I'd make if I could/ Are a ruse and no good/ Now the merry dancer is on the loose'

I94bar: I suppose 'Merry Dancer' isn't about Puck and a Midsummer Night's dream?

Shark Arm: No, 'merry dancer' is rhyming slang for cancer.

I94bar: Fuck. And these lines in 'Hubris'; 'Attention deficit you don't give a fuck, another psychoactive spastic and a loaded gun/ A broken record and a selfish cunt' ... you end the song with ... 'Grow up and take your medication' ... I've met a few people who are nightmares because their idea of normal is everyone else's idea of\ misery. I s'pose this is drawn from life?

Shark Arm: Cabin fever in a butcher shop combined with methamphetamine abuse and long work hours with sharp knives. Pretty full-on. He was OK when he was on them. ADHD. He was my supervisor. Butchery is full of them.

I love "Any Port in a Storm", and I reckon you'll be swept up in the Shark Arm as well. You'd be a goose not to download it here or here.

Oh, and I think the band may have a few of their 7"s and tshirts still available. They got very inspired; it only comes as a picture disc, and it's bloody inspired artwork by Glenno Smith (Chinese Burns Unit). Beer and sharks, what could go wrong?  Hit them up here.