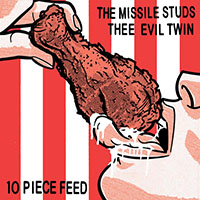 The Missile Studs have a theme song (“Missile Studs Theme”) and it's their opening cut, delivered in stand-and-deliver style. It sets the tone of their half. You can hear the sneer in the vocals of Richard Gear (let’s hope no gerbils were harmed in the making of this record.)

It's said clothes maketh the man but there's no need to wear your Sunday best when you hit a drive-through for takeaway. The Studs songs are unabashed Op Shop Rock. Bandmates Sandra Bollocks (bass), Brad Shit (guitar) and Harrison Bored (drums) add their own off-key backing vocal embellishments that put the ragged into a song like “Doomsday Girl”.

Three of the five Evil Twin selections are covers but don't let that stop you digging deep into their share of the KFC box. "Poor Born" is a Dead Moon song (and a great one) and Thee Twin adopt it fo their own purposes, adding their own stamp.

Fangin' Felines members Morgana Ancone and Carrie Phillis add backing vox to a loose and limber "Let's Go Again", a Hank Ballard and the Midnighters cover where Adam Caine's guitar falters and wanders before eventually finding its way home. The same girl group treatment gives "She Is The One" a rough sheen that's damn near irresistible.

Opener "Do Stuff" is a paen to doing very little and showcases what Thee Evil Twin does (did) to great effect: Simple, raucous and melodic. So, great fun. "Say The Wrong Thing" references social awkwardness with a brash, sharp attack that engraves "Should Have Made an Album" onto the band's headstone.

You can't get this from UberEats but it is on Bandcamp in LP and digital formats and from Evil Tone Records here. Take my money.