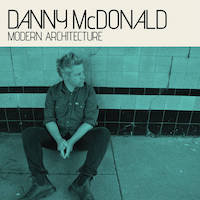 Hooky "Cordyline" sets the pace with its short blast of jangle and soaring melody that could be the theme song for a TV gardening show - if they made a season about a genus of 15 kinds of woody monocotyledonous. It's ovr way too soon. Anna Burley joins Danny and band on the country-flavoured pop of "The Suburb I Grew Up In" and it's relatable in its lyric about decay without a whiff of cultural cringe. "Judge Me For My At, Not Where I Live" makes itself known with a brief flurry of guitars and makes a statement for rust belt towns all around the world.

Flip the bugger over and there's more of the same, although not with the same brevity. "Commuter's Lament" is mid-tempo, swoony pop that is easier in the going than any drawn-out trip on Melbourne public transport in winter. "Keeping the Dogs at Bay" is more working man's pop with a great feel. Hell, if singing about the mortgage belt can make Brooooce a multi, where's Danny's cut? He writes much bttr songs, for a start.

"Modern Architecture" is available as a vinyl seven-inch, a CD or in digital format here.