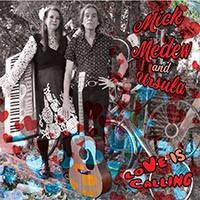 Love is Calling - Mick Medew and Ursula (I-94 Bar Records)

Two years of lockdown were not wasted by Mick Medew and Ursula Collie-Medew. Besides getting married, they also managed to entertain every second Sunday with their live lockdown streaming gigs.

The streaming shows were wonderfully received, with Mick playing some classic songs from his back catalogue with the Screaming Tribesmen and others, plus new tunes, and Ursula sitting in on keyboards on a few. When words reached The Farmhouse that Mick and Ursula were releasing a new CD of songs written over lockdown, I for one was excited to hear how these tunes would sound with full production.

So let’s break down the tracks.

“White Star” is a moody instrumental. Following that, the title track has some fantastioc vocals and guitarwork.

“Goth Night at The Synth Ball” is, in my humble opinion, one of the very best Mick Medew tune.

“36 Degrees” just drips sweat and you can feel the warmth radiasting all the way from sunny South-East Queensland.

“Dream Come True” is a funky blast and I would love to see this played live as there’s some serious shredding of the guitar going on here.

“Past The Borderline” is a soulful tune that’s just lovely. “77 Times” is where

“77 Times” is where Ursula shines on keys; you could swear there’s an orchestra at work, and it’s a great piece of songwriting happening on this tune .

So folks. this is a fabulous CD. It’s well-written and beautifully recorded. The sound is so clear and the playing by all is brilliant. And that voice just gets better with age.