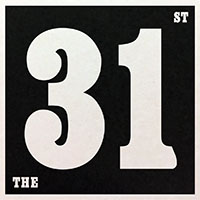 Ronald S Peno was a blow-in from Gosford in New South Wales, where he’d been lying low after fronting notorious Oxford Funhouse regulars, The Hellcats. No, I never saw them, but a tape survives and the tuning between songs is nearly as long as some of the covers they played. So The 31st were probably a step above. The other memberss were inner-Brisbane locals who met at school.

The songs were recorded for a planned release and shelved, salvaged from a cassette copy and given five-star restoration treatment by mastering wiz Don Bartley. They always sounded good but the makeover makes them magnificent. The new presence and the clarity in the bottom end especially makes a world of difference.

Fans of the early Tribesmen will know “A Stand Alone” from the band’s second 45. Ron’s vocal sounds a little strangulated - remember, this is before Died Pretty’s “Out Of The Unknown” single where he had to sing with guitarist Brett Myers, so unsure he was of his own voice.  The band’s playing is tentative, too, but the glimmers of greatness are there. Tony Robertson’s melodic bass is especially good and Welsh is well on his way to becoming the powerhouse he is.

Mick Medew’s serrated guitar on “Time Moves Fast” is indicative of the ace axeman he’d become and the song’s my pick of the litter. Ron’s vocal drips with attitude. “Real Gone” was to be recorded by Robertson’s future band The Naked Lunch and this version is revelatory. “It’s Hard” again highlights the strength of the engine room with Welsh’s explosive fills and Robertson’s bubbling bass locking in.

Liners by their ex-sound guy, Mark Louttit, round off a nice package. The purchase link is below. Click or regret.