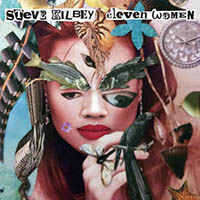 It was recorded at a new Damien Gerard Studios (relocated from Sydney to the New South Wales Central Coast) and birthed in a burst of creativity that’s involved Kilbey in four albums in the space of a year,"Eleven Women" is the best thing he’s done outside the confines of his usual band.

“Eleven Women” is a coherent and strong record of alternately psychedelic folk and arcane pop songs that’s less polished than the usual Church efforts - and sounds all the better for it. Loosely based on the concept of songs about 11 women, it’s playful and instantly accessible - the sort of record that gets under the skin quickly and lends itself to repeated plays.

The songs equal the performances and there’s a lot to like about a batch of tunes that were done in one or two takes.

“Sheba Chiba” is mid-paced pop with an uplifting melody. “Birdeen” bounces off some light guitars and Price’s toms.  “Josephine” is a Coogee sea shanty that reels along on a backbone of mandolin and a breezy Kilbey vocal. The moody “Birdeen” coincidientally sounds like Ian Rilen’s “401”.

“Think of You (For Bessie Bellette”) is a relatively wordy and gentle song of reflection. “Baby Poe” is an exuberant singalong that contrasts with the grown-up “Doris McAllister”, a grand concoction that would be at home on a Church record. Let's hope when it eventually gets recorded, that one will retain some of the raw spontaneity of "Eleven Women".