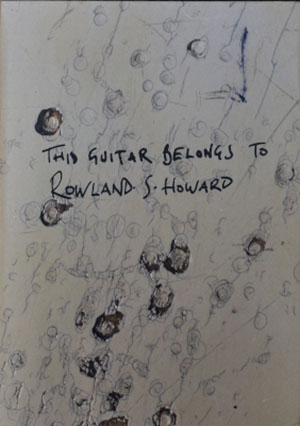 There have been a number of times over the years when I have peered at the magically broken and scraped guitars of assorted underground musicians, and thought: "There should be a book to document these".

Ever look at the Beasts of Bourbon guitar rack? Or Ian Rilen's monstrous creature (laughingly thought of as a musical instrument)? I'm sure you can think of many other extraordinary-looking ... things.

Harry Howard, who played with Rowland S. Howard in Crime & the City Solution and These Immortal Souls, has produced this book because he loves his late brother.

The only text in the book is on the rear cover - all six lines of it.

Doesn't matter. The words are there as brief explanation.

Photography is by Linsey Gosper.

The production of this book is simple, forceful, and completely in your face. The grittiness, the raw nature of it, the stripped-down and away forms ... Hell, it's like viewing a mining site after twenty years, the colours peculiar, lurid, alien and yet compelling, ugliness giving way to some sort of importunate lush beauty.

Rowland's Fender Jag is the one of a handful of guitars which helped shape our present, and as I look at these pictures I can hear Rowland saying, in that emphatic way he had, "extraordinary!" or "just fantastic!"

Q What is Rowland's guitar?

HH: What are you asking, Robert? Are you after the model and similar details? It's a Fender Jaguar made in California in 1969, bought by RSH in Melbourne in 1979. It is also a lightning rod RSH utilised to enable forces from parallel dimensions.

Q I can understand photographing the guitar from the outside. The bodywork is nothing short of astonishing. But Harry, what on earth possessed you to pull apart the Jag?

HH: There was no 'pulling apart' involved, Robert. What screws together also unscrews.

It's a fascinating hidden world inside a guitar. Guitars are full of details, dates, neck width stamps, initials, numbers, and marks. There's a lot of information down there.

I was with photographer and friend Lindsey Gosper. Lindsey, who is responsible for all the glorious photos.

She was sympathetic, patient and systematic as we carefully mapped out the guitar, capturing every part and angle, and focussing on the wear and tear it had gathered through its long career.

I have dismantled lots of guitars before and everything was done with the greatest of care.

The message Rowland had left in there was the crowning glory of that procedure.

He always wrote his name in books, it was typical of him ~ I can't impress on you enough how protective he was of that guitar.

The note inside was his last line of defence if it ever became lost or stolen.

But it also tied the whole book together.

It was amazing that he had kept hold of that one guitar throughout such an extensive life of music.

And his amp likewise. Most musicians endlessly swap and change and accumulate gear.

He knew this guitar was for him.

This guitar was his co-conspirator, they pooled their strengths and weaknesses and with RSH at the helm made something unique and fantastic."

Q And, have it photographed, of all things?

HH: I found myself nervously minding Rowland's Jaguar about a year after his death. It was worrying: what if it got damaged or stolen etc?

It lay in its case virtually untouched, certainly uncleaned.

It had blood on it. A dried drop or two and a smear or three.

One day I got it out of its case and realised that it was a really special cultural artefact, that it was fascinating that it said so much about Rowland ~ it even reminded me of Rowland's body as he became iller and the scars of his lifestyle became more and more visible.

I would have photographed it myself but I don't have the skills so I rang Linsey Gosper. I really wanted to this as a kind of personal tribute to my brother. I won't get personal here ~ but it was very personal. Gen and Angela kindly gave me the ok, I contacted the books designer Yanni Florence (he was a friend of Rowland's), we arranged a meeting and set the book in motion.

Special thanks to comrade Simon Strong for setting up the online purchasing at Leda Tape Organisation.

Q You saw Rowland play so often over the years, I wonder if you could tell us a little of what that was like for you..?

HH: Well, I was always really impressed by Rowland. Creatively he was so fast and adaptable but always himself. He was my older brother anyway so I grew up with him ahead of me on everything and he was much more focused than me, but yeah I am very proud of what he did and even of what I did with him and I miss him very, very much.

You know what to do, folks. There weren't that many printed, and there aren't many left. Buy it here.