Written by Robert Brokenmouth on 19 November 2018. 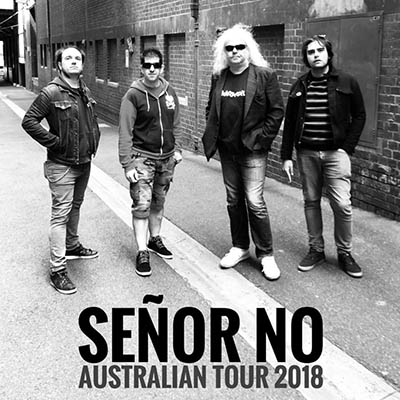 My photographer is home nursing a hot toddy, so we don't have her visual evidence, but I am here to relate that tonight's proceedings open with a faulty bass and random noodlings as Psycho Derek and the Reissues get themselves ready. Once they start, you either get it right away, or you may as well head for the bar (and don't come back, in my opinion).

Despite some of Adelaide's best musicians being in the band, Psycho Derek is a glorious shambles with Psycho Derek (aka Sam) leading the band as they lurch through a set of '60s classics, filtered through their own rackety garage. I bet there's a lot of echo where they rehearse.

Don't know what I'm on about yet? Look, The Animals could play corporate gigs and they'd get a rousing reception. Psycho Derek would bewilder and annoy the suits (which is another reason to see them while you can, incidentally) but both bands operate from a similar core of self-deterministic rebellion.

The Sunday Reeds still impress me; they have a clear style, a quiet power and watching Drew's effortless control, and Romana's 'put up or shut up' attitude is a balance worth your attention. That big beaming smile at the back belongs to their new drummer, Shakey McGee; together, The Sunday Reeds are sufficiently arresting and unusual to capture the attention of a variety of audiences (not the rock demons Adelaide somehow summoned tonight). I can't wait to see what their next move is.

Wrong Turn, I've never managed to catch before. They have a few tech issues and squeeze in a short set, which can't be easy for them as they've come over from Melbourne. On first listen, they remind me of The Ramones live album, with less bubblegum, more barbed wire and Germans in pointed helmets. Nasty sound that guitarist has. Wrong Turn were damn good and I want to see them again; apparently they have a new five-track vinyl EP out. Get it.

The stars of tonight's show, Senor No from Basque Country in Spain, win the crowd over within 30 seconds, starting and ending their show more or less at full throttle. Sure, there are carefully selected pauses within a few songs; I liked the way the songs have several dimensions, too ... but that's not what really gets you.

The first is their relentless pace, but the second is the energy and rebellious self-belief these men have. That's the stuff, that essential oil of communication. So what if half the songs are in another language ( "... Italian?" queried one punter). Doesn't matter. It's that rich, loamy scent of meaning, of dense and liberating sensation, of commonality. Senor No celebrate our togetherness, our cameraderie in this upside down world of rock'n'roll. 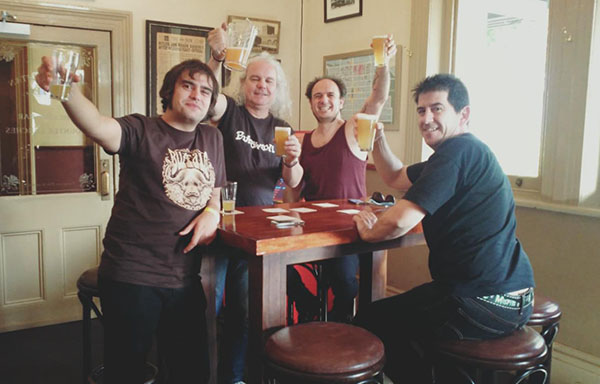 Alright, look, we all know rock'n'roll is an environment rich in cliches; and that cliches in themselves aren't necessarily bad. Not a single band tonight were boring or predictable; the difference between a bunch of schmoes clodding through another bloody set, and an independently-minded bunch of Basques hammering away like their lives depended on it is - the emotion.

Senor No believe in what they do. The beery toasts, the raised guitars, the jumping about, the unselfconscious guitar hero stuff ... it's not an act, it's really them. It's what they are. And for some bizarre reason, they came to (of all places) Adelaide to play a gig. And everyone understood this, and loved them for it.

They played mightily, sweated lots (particularly the drummer, Fosy who, behind the kit, looks like his day job involves tearing the heads off angry bulls with his bare hands) and the Metro was a very happy, dizzygalizzy place. What do the other blokes in the band look like? Photos don't do them justice; you'll have to get off your butt and go see them.

Senor No have CDs out; get them or you're a dickhead.